The weather, before and after Christmas, brought disruption across the country, with the inevitable snow photos appearing everywhere, so below is a photo of how the windmill looked after nearly a foot of snow fell on Wednesday 6th January. 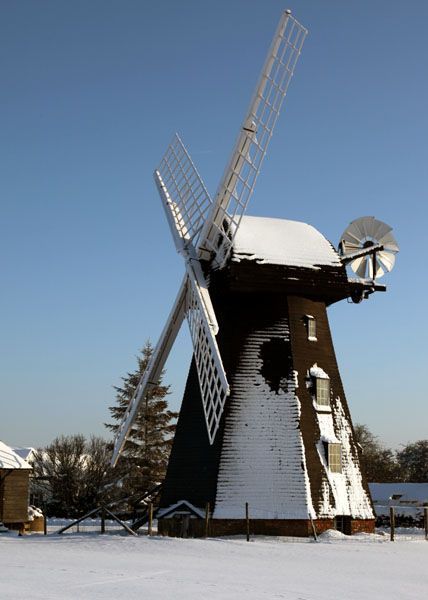 Taken on a duller day, this photo shows the view from the top of the windmill, looking SW.

However, neither of the above photos really show how extreme the weather had been. Snow thawed very slowly in the occasional sunshine, but as soon as the melted snow drips into the shade it was re-frozen, causing large and spectacular icicles to form. However they are very heavy ansd can cause considerable damage.

These 8 foot icicles were on a property just 5 minutes walk from the windmill.

The windmill also suffered from a freezing problem, with ice forming around various parts of the fantail mechanism such as the fantail shaft bearings, stopping the fantail from turning. The ice was chipped away at around 9 am on Sunday 10th January.

National Mills Weekend - May 2010, and a special visitor

During this annual weekend, on 8th and 9th May in 2010, as many mills as possible were open and working. Lacey Green Windmill was, as usual, just open on the Sunday, but we had extended opening hours from 11.00 am to 5.30 pm.

Despite a misty and damp start, the weather allowed us to have the sails turning, and a good wind kept them moving all day. However the wind was from the NE and it was a very cold day.

People might not imagine there would be much connection between a Buckinghamshire windmill and the Dambusters Raid by 617 Squadron on 16-17 May 1943. Elsewhere on this website you can read that it was Christopher Wallis who led the restoration of Lacey Green windmill from 1971. You can also read that Christopher's father was Sir Barnes Neville Wallis, inventor of the revolutionary bouncing bombs used to smash the Ruhr dams. The 70th Anniversary will be marked in 2013, which will receive a lot of publicity. News coverage then will also strongly feature the sole British survivor who took part in the raid, Johnny Johnson. At the age of 21, he was a bomb-aimer in the nose of one of the Avro Lancaster bombers.

In 2010, by special request, I (Michael Hardy) was very pleased to meet Johnny Johnson who visited the windmill, and to answer his questions. He told me that in planning meetings before the 1943 raid he had met Barnes Wallis, and had met the young Christopher Wallis, then 8 years old, and whose marbles were used for demonstration purposes. Johnny Johnson had always remembered Christopher and followed his career, knowing well that his interest and enthusiasm for restoring Lacey Green Windmill had led him on to a career working with historic buildings and particularly mills. Johnny had been sad to hear of Christopher's death in 2006, so when attending a meeting nearby in Wendover, he asked if he could go and have a look at Lacey Green Windmill. I was naturally pleased to help, and Johnny Johnson was pleased to stand outside the windmill, so I could take his photo, on National Mills Day, 9th May 2010. 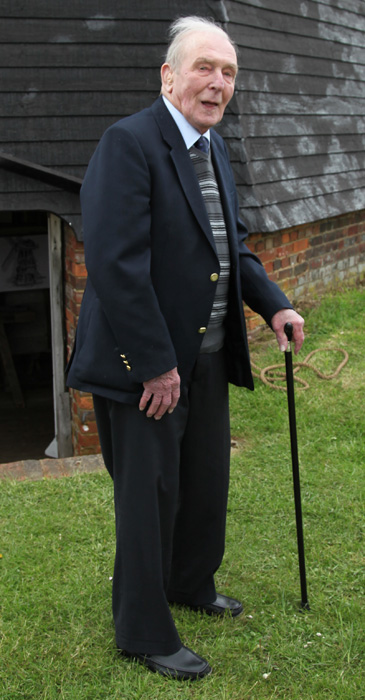 At 10 am on Bank Holiday Monday 31st May there was a walk at Lacey Green, led by a local naturalist, John Tyler (who is also one of vulunteer windmill wardens on Open Days). It was followed by an optional special opening of the windmill for those who had been on the walk.

The walk was described as follows: A leisurely 3-mile nature walk from Lacey Green Village Hall at 10.00 am, down Highwood Bottom, through Monkton Wood and back along the Chiltern Way to finish at Lacey Green windmill. The walk involves a few moderate slopes and 8 stiles, and can be muddy. After the walk, there will be a special opening of the 17th century windmill for the walkers. John Tyler is a local naturalist who now leads walks and is a very popular lecturer. See his website at www.johntyler.co.uk (this link is set to open in a new window or tab)

In June and July 2010 a new electricity supply was run to the windmill. The windmill has been completely rewired and new lighting has been installed. Enclosed bulkhead fittings have been used which are all fitted with energy saving light bulbs. Energy Saving Floodlights have also been installed to light the interior of the cap, which is now easier to see, particularly on dull days. Despite there now being 36 light fittings within the windmill, the total power consumption is less than 450 watts.

The work was part of a project that was assisted by the Leader programme of the EU and DEFRA.

As prominent features in the landscape, windmills would often be used to recognise national events by being "dressed" in a similar way to a boat being "dressed" with flags and bunting. To mark the wedding of Prince William and Catherine Middleton (who immediately became the Duke and Duchess of Cambridge), the sails of Lacey Green Windmill were dressed for the day, which was rather a grey one at Lacey Green. 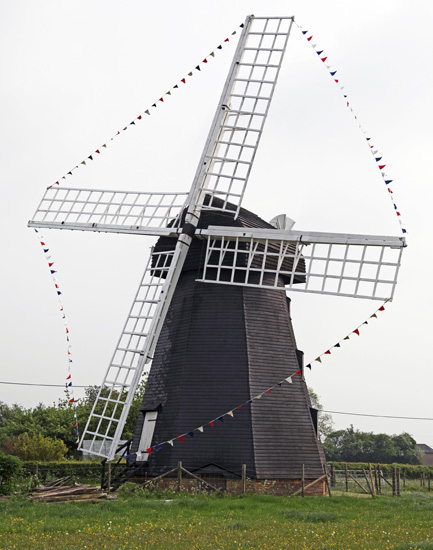 The windmill's sails were parked in the position that traditionally notes a happy occasion, which is just before the ascending sail has reached the upright position. The top sail just starting to descend on the other side is a position to denote a sorrowful occasion. However, I rather suspect that such fine detail was not realised by many of the people who may have seen the bunting flapping in the strong breeze.

Great Haseley windmill is a familiar site to people travelling on the A329 to the SW of Thame in Oxfordshire. The tower mill (which probably dates from the 18th century) stands in a field just a mile to the SW of Junction 7 of the M40. The Great Haseley Windmill Trust was formed in 2005, and work started on restoring the windmill in July 2009. The mill was open to the public on Sunday 15th May 2011.

The windmill has a website but more information can actually be found on a blog written by one of the restoration team, who are also our millwrights when neeeded at Lacey Green. (both of these links are set to open in a new window or tab)

National Mills Weekend was on the 14th and 15th May in 2011. As usual, Lacey Green Windmill was only open on the Sunday (15th May), but our opening hours were extended from 11 am to 5 pm. The wind on the day proved rather too variable, you can read a report on the day at NMW - 2011 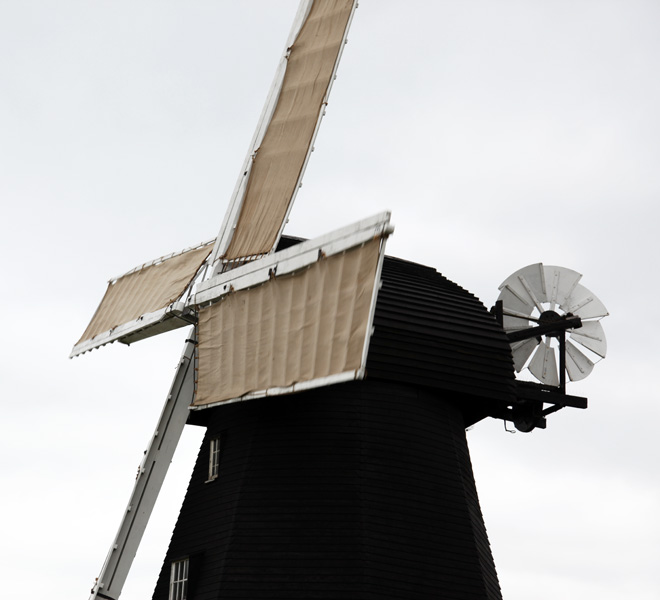 Great Haseley windmill stands near the A329 to the SW of Thame in Oxfordshire and just a mile to the SW of Junction 7 of the M40. It was open on Saturday 12th May from 13.00 to 17.00. Details of the windmill's website and blog can be found above, under 2011.

As usual, Lacey Green Windmill was only open on the Sunday (13th May), from 11 am to 5 pm. We had a good breeze in the afternoon, turning the sails at a good speed with just two sailcloths fitted. Our village Horticultural Society had their usual plant and produce stall close to the windmill, and this year we also had a local producer of organic apple juice join us, offering tasting of their different varieties and selling juice by the bottle. You can read more about their enterprise at www.drovershillfarm.co.uk (this link is set to open in a new window or tab)

With one moved Bank Holiday, and one extra Bank Holiday for the Queen's Diamond Jubilee, we were open from 2-5 on Sunday 3rd June, Monday 4th June, and Tuesday 5th June.  We dressed the windmill with bunting on the sails, as well as some Union Jacks, but for a 3 day period we were not able to park the sails in the traditional celebratory way that we did for the Royal Wedding in 2011. 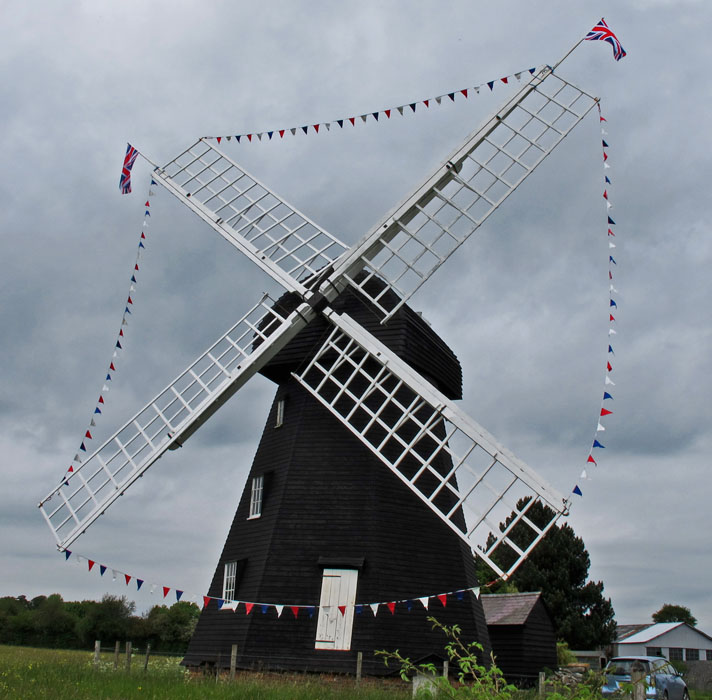 The windmill "fully dressed" for a very long weekend.