Christopher Wallis died on 10th May 2006 after a short illness.  Lacey Green Windmill only stands today because of his passion for historic buildings, and mills in particular.  Since 1971 he was the driving force behind the many volunteers that between them gave thousands of hours of their time to restore the windmill.

After starting the restoration at Lacey Green, Christopher left his work as a Civil Engineer.  He then devoted his engineering and carpentry skills to restoring many other historic buildings across the country. Lacey Green Windmill was therefore the catalyst that led Christopher to changing his passion for historic structures into action, whether campaigning, advising, encouraging, or restoring structures himself, sometimes being paid, and sometimes as a volunteer.

His everlasting enthusiasm has been instrumental in encouraging many other people to take up restoration work.  The mere fact of hearing Christopher's strong opinions, or seeing the work that he has achieved, has led many more people to appreciate the vital importance of preserving historic buildings in our landscape.

Christopher's interests in historic buildings and in the Chilterns were combined at the Chiltern Open Air Museum. He was involved in establishing the museum, and with erecting many of the buildings there. The museum houses the Christopher Wallis Collection of Timber Joints which has been made by Tim Hallewell, a carpenter and furniture maker. 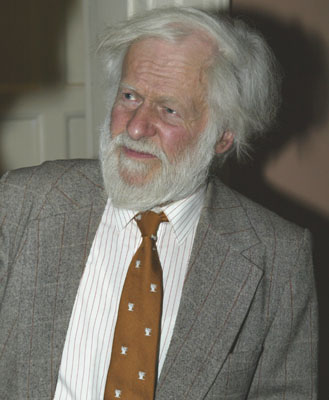 This photograph shows Christopher Wallis at an event in October 2005 which marked the 40th Anniversary of the founding of The Chiltern Society at The Guildhall in High Wycombe.  The area of the Chiltern Hills was always a special place to Christopher, where he and his wife Barbara chose to live and bring up their family.

Only 7 months after I took the above photograph Christopher died, which was only 3 days before National Mills Weekend. We had to decide whether to open Lacey Green Windmill as usual on Sunday 14th May. It was soon obvious that there could be no finer way to remember Christopher than open up the windmill for all those who knew him.


Christopher's work should be evident throughout this website, but below are some links particularly relevant to Christopher.