By its construction methods, the internal wooden machinery appears to date from the middle of the 17th century, around 1650. It has been dated as such by many well known mill experts since the 1930s.

Most books refer to the fact that in 1821 Lacey Green windmill was moved from Chesham, which is 9 miles to the east. However extensive research has not found any actual evidence of this, indeed records indicate that a mill existed at Lacey Green before 1821. In recent years, people in Chesham have been looking closer at the subject, and an archaeological survey has been made of the mound in Lowndes Park on which the windmill was said to have stood. The conclusion, as reported in 'Chesham Town Talk' (Issue 41 of Autumn/Winter 2009), is that "It would appear that sadly we (Chesham) may no longer be able to stake a claim to this historic landmark (the windmill).  The article, written by Peter Hawkes, is on the Friends of Lowndes Park website and can be see by clicking here.

Lacey Green Windmill Restoration Committee now presume that the windmill has always been at Lacey Green, because of the lack of any type of evidence to support any other case. Tracing the 19th century history of the mill is closely tied to records of the millers who operated it. Research is continuing to try and find more history of those who ran the windmill in the past. There is more to be read on this subject in our booklet on the windmill, please click here for further details.

However, we can say that the body of the mill was undoubtedly rebuilt in the early 19th century, and at some time its machinery was modernised. The modernisations included the fitting of a fantail (on the back of the cap) to turn the cap into the wind automatically, the fitting of a pair of patent sails, and adding interior refinements such as a governor (for some automatic adjustment of running speed), a smutter (to clean the grain), and a bolter (to sift the flour). 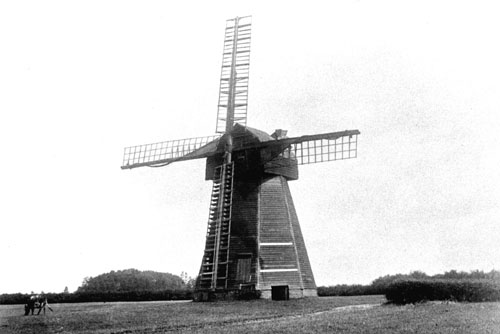 This picture dates from around 1900.  The common sails are horizontal (with their sailcloths tied up), and the patent (or shuttered) sails are vertical.

The windmill was in use until around 1915. After this it was used in the 1920s as a weekend cottage. However despite some obvious attempts at weatherproofing (with corrugated iron sheets and roofing felt), by the mid 1930s it was in a poor condition, and rapidly deteriorating. 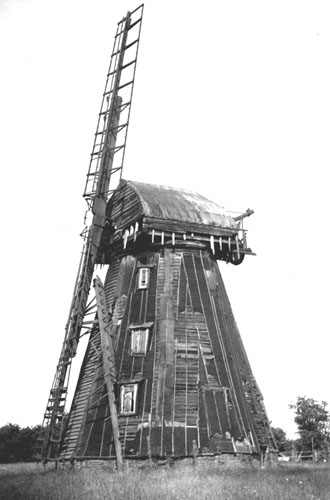 In 1934, two sails remain, and a third leans on the mill.  The fantail had blown off in a Christmas snowstorm in 1927.

The corners of a smock mill are vulnerable places to allow water in, and any water will immediately attack the cant posts (the corner posts) that form the main structure of the mill.  This had obviously happened at Lacey Green, and was starting to cause fears that the mill would collapse.  A number of local people, together with members of SPAB (The Society for the Protection of Ancient Buildings) got together to make repairs to the structure of the mill. 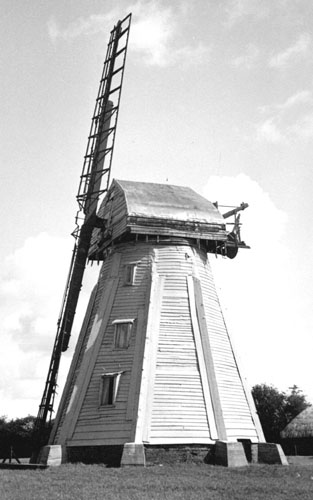 By August 1935, exterior posts supported the corners, set on concrete blocks.  The mill had then been painted white.

However by the late 1960s, the mill was once again in a desperate condition, the whole body being twisted and tilted.  It was certainly becoming very close to collapsing. 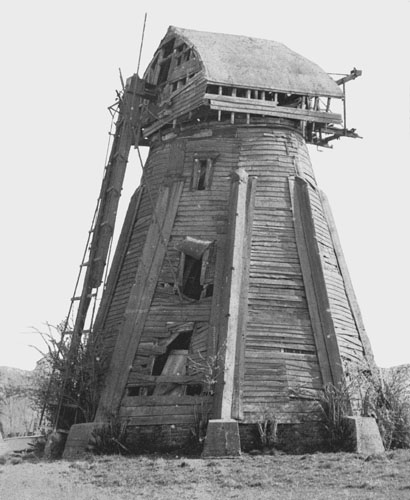 The mill's condition in 1969 inspired action to restore the body of the mill, to preserve the unique interior wooden machinery.

Two years later, in 1971, a team of volunteers started work on restoring the windmill, you can read more about their work on the Restoration page of this web site, by clicking here.