The windmill, as usual, was only open on the Sunday, from 11 to 5.  The weather forecast (on Saturday) predicted gusty winds for Sunday morning, and rain in the afternoon. As they are the worst conditions for us to safely operate the sails, the decision was taken that we would not attempt to fit the sailcloths. Therefore our volunteers who help us with the cloths were told, and a note was put on this website to inform potential visitors.

On Sunday the wind was strong enough to keep turning the sails most of the morning, without any sailcloths. However, there was rain for most of the afternoon, although not as severe as it could have been. During the day, we had 170 visitors inside the windmill. Our village Horticultural Society had their usual plant stall, which did a good trade, despite their fears of not having enough plants to sell, due to the very late spring. We again had Drovers Hill Farm with their local Apple Juice, but their range was depleted by the poor weather in 2012.

A list showing other mills open in Buckinghamshire and surrounding counties for National Mills Weekend 2013 was displayed in the windmill, and made available on this website.

On Sunday 14th July 2013, John Wood, Chairman of the Heritage Committee of the Institution of Mechanical Engineers presented their 86th Engineering Heritage Award to Lacey Green Windmill. It was received by Barbara Wallis (widow of Christopher Wallis), on behalf of the Windmill Restoration Committee. This prestigious award is a great honour for the windmill, those who originally built it, and those who restored it. It was the first of these awards to be presented to a windmill. Lacey Green's mid 17th century machinery is also the oldest machinery in any of the items given previous awards. 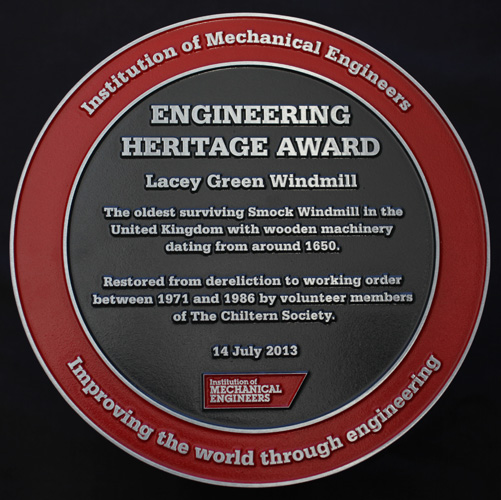 The plaque, now inside the windmill. 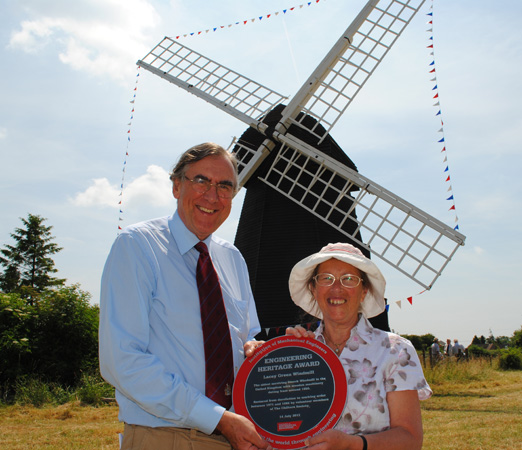 John Wood and Barbara Wallis with the Award Plaque.

On this website we have three pages about this award, including a report on the presentation ceremony, and the full text of all the speeches made. They can be found via our EHA - SUMMARY PAGE. You will also find other links to information on the Engineering Heritage Awards.

Following our Engineering Heritage Award, on Bank Holiday Monday, 26th August 2013, Lacey Green Windmill was featured on the Daily Mail's website. The feature can be seen at http://www.dailymail.co.uk/news/article-2398266/ (this link is set to open in new window or tab) NB - The large number of photos may take some time to download.

The September 2013 edition of Buckinghamshire Life shows Lacey Green windmill on the front cover. Inside is an article (and another photo of the windmill) describing a circular walk around the villages of Lacey Green and Speen. 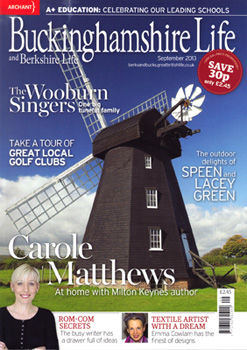 I was very pleased to say that we had some new volunteers to help us open the windmill. I had to organise a training session for them all just before our open season started, and I was inspired to write a new "handbook" for all our wardens who open the mill, giving them copies of all the displays in the basement of the windmill, and some more "in-depth" descriptions, photos, and diagrams of what different parts of the machinery are called, how they work, and what they do.

Update in February 2018: All the volunteers who joined us (apart from 2 who have moved away) have now done 4 years service and tell me they enjoy their time at the windmill, and meet a variety of interested visitors. I know that they do a good job, naturally in their own styles, and some of them have also proved wonderfully valuable at getting involved with work on the windmill itself.

The windmill, as usual on this particular weekend, was open on the Sunday only, from 11 to 5. On a cold day the sails turned for 6 hours. Our village Horticultural Society had their usual plant stall near the windmill, and Drovers Hill Farm again had their local Apple Juice for sale. 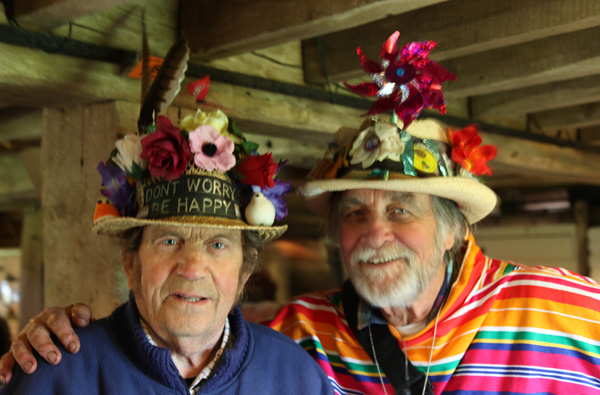 An Important Announcement, about turning the sails (14 May 2014)

We are not able to operate the 360 year old machinery inside the windmill, so not being under load, the sails are effectively freewheeling. This decision has been taken in the light of recent experience with the increasing unpredictability of the weather. We now have increasing winds in our unusually high and exposed location for a windmill, with the tips of the sails being 800 feet above sea level, on the top of the Chiltern escarpment.

We fully appreciate that it has given many people great pleasure to see the sails turning for the last few years, but there are now quite a few windmills which can operate, but all of them have machinery that is less than half the age of ours at Lacey Green.

Occasionally we have to turn the sails for maintenance purposes, and indeed they should be turned at regular intervals, but on those occasions they will be strictly controlled.

Lacey Green one of the 10 Best Wind and Water Mills

We were very pleased that Lacey Green Windmill was chosen as one of the 10 best mills to visit.

World Cup Hockey may not immediately seem to have a great deal to do with Lacey Green Windmill, but we were chosen for a publicity photo shoot for England's Team Captains Kate Richardson-Walsh and Barry Middleton. Looking to salute the Netherlands with a Dutch flavoured setting before their trip from Bisham to The Hague, they chose our smock mill, reminiscent of so many Dutch mills. 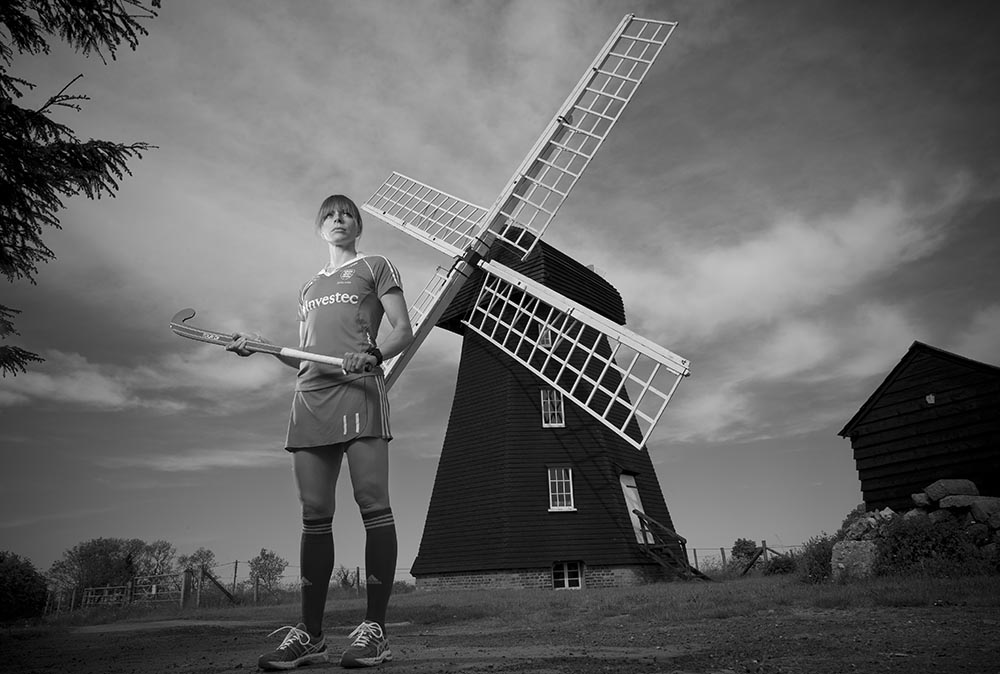 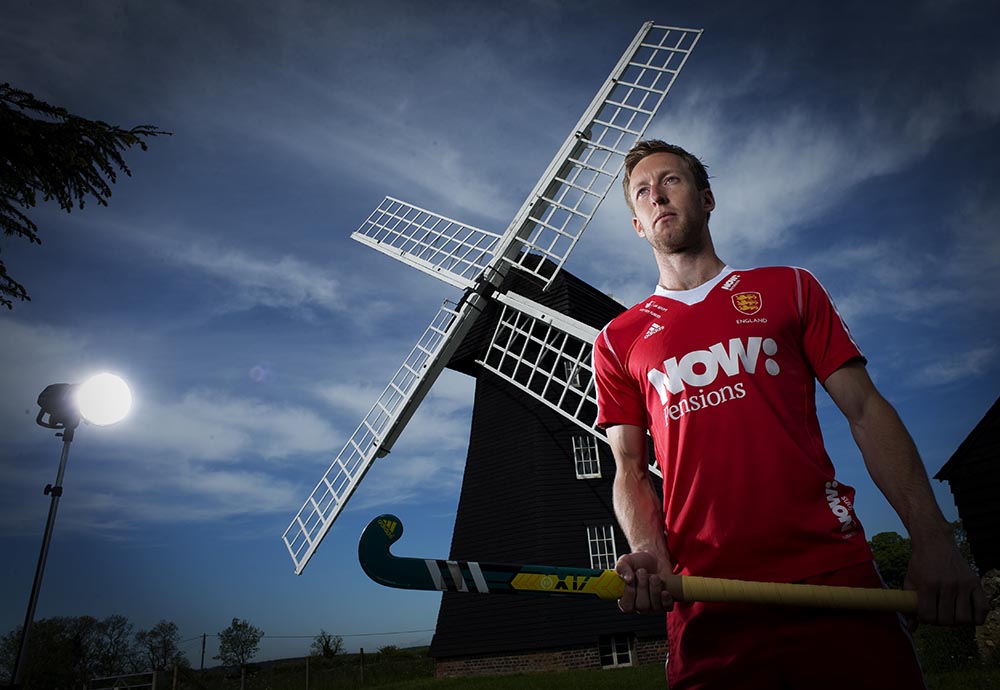 These were three of many photos in various media, including newspapers and sports web sites. 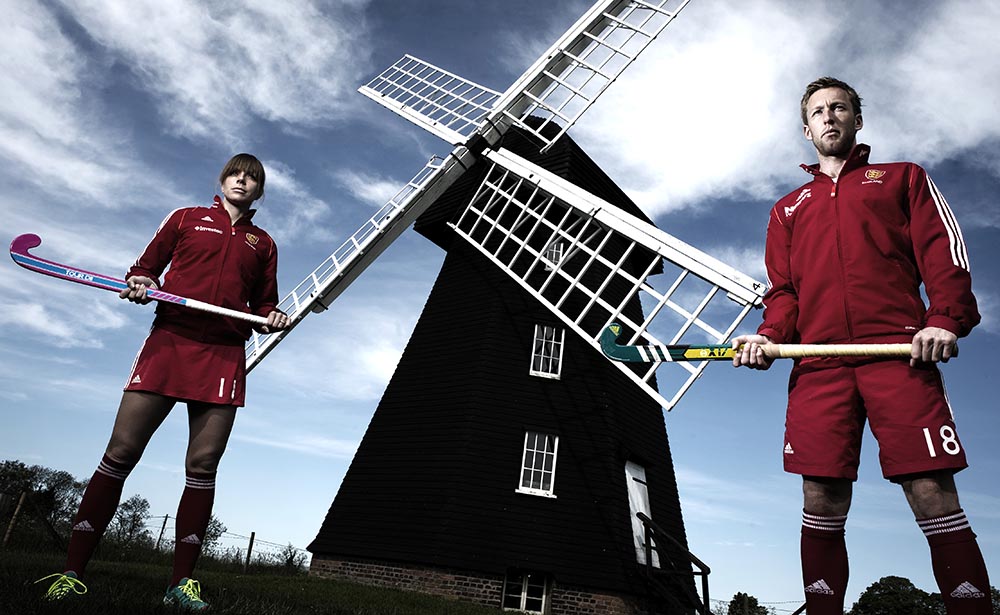 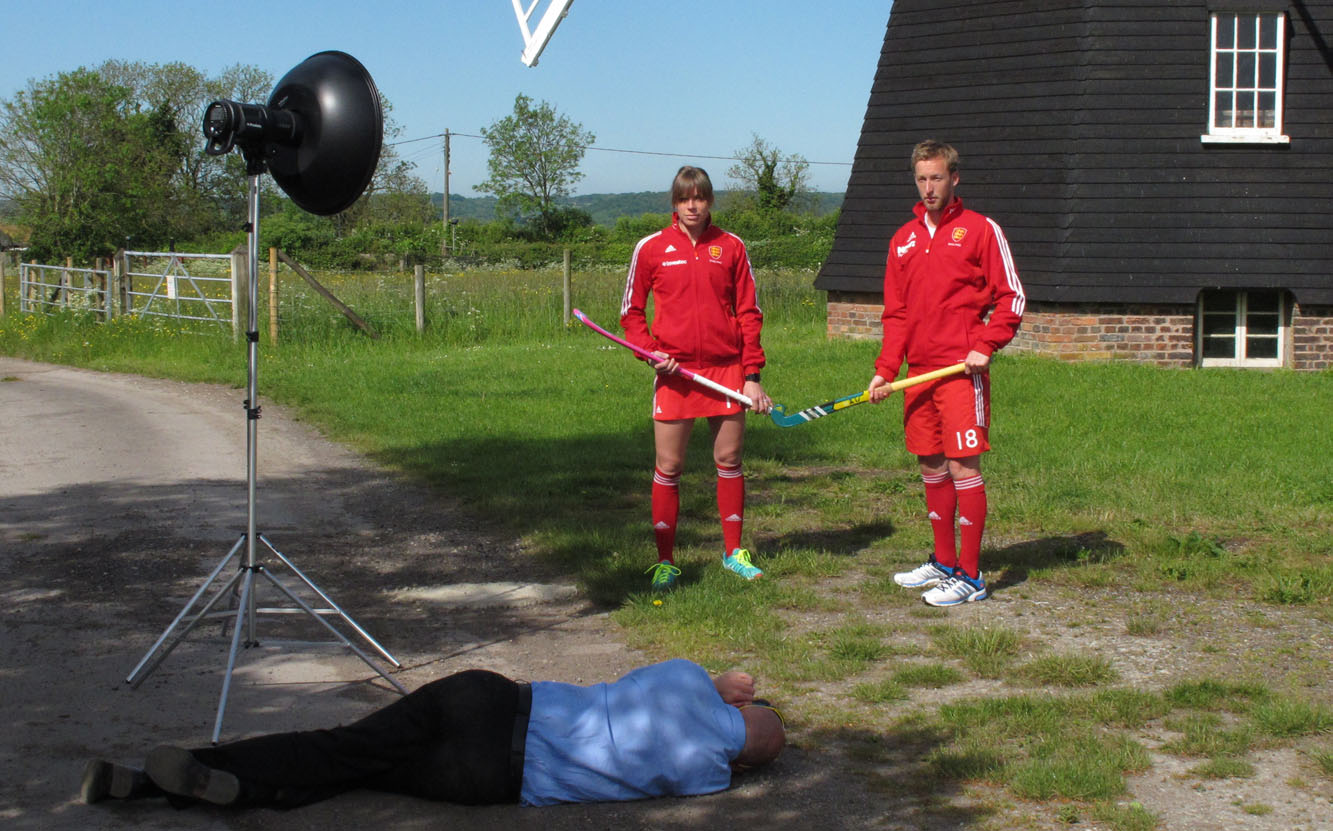 The media had many comments that the photographer must have been very short to take such low shots, but I can reveal that a sports photographer's job is not always a comfortable one, especially when dressed in a suit for the England Hockey World Cup media day.

Wycombe District Council chose Lacey Green Windmill as their Attraction of the Month for June. There was a Prize Draw at their 3 Tourist Information Offices (High Wycombe, Marlow, and Princes Risborough) between 1st and 28th June. The prize was won by a family who later came to the windmill and enjoyed their Private Tour. 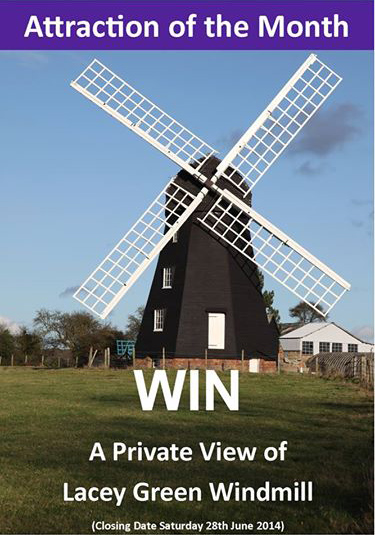 The Chiltern Society has a very sensible policy of providing information boards at the properties that it cares for, giving basis details of each property. The 21st century terminology for this sort of fixture is "Interpretation Boards". In the case of boards for the windmill, funding had been arranged, and once agreed with the appropriate landowners, it was decided to have one board at the end of the path leading to the windmill, and one in the garden of the adjoining pub "The Whip Inn". All the boards have a fairly consistent design, so all we then had to do was agree the content for our boards, which was done, with certain compromises between the windmill officers, the Chiltern Society hierarchy, and the actual designer (see image below). 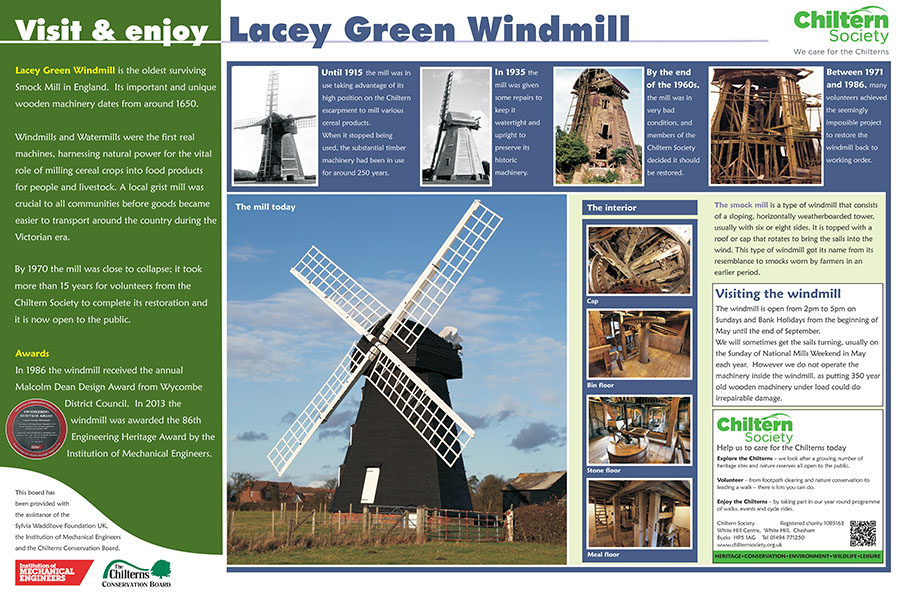 The boards were ready and installed on 20th June 2014 with the kind help of two of the Chiltern Society's Path Maintenance Volunteers, who have the expertise and tools available for this sort of installation (see photos below). The boards are made to be very resilient, and hence pretty permanent, but inevitably facts like our opening hours change (as they have done since 2014). However there is space adjoining both boards for some update material which can be changed each year. The boards provide useful information to passers-by about the windmill, and crucially when they should return to actually visit the windmill. I am pleased to say I often see people reading both boards. 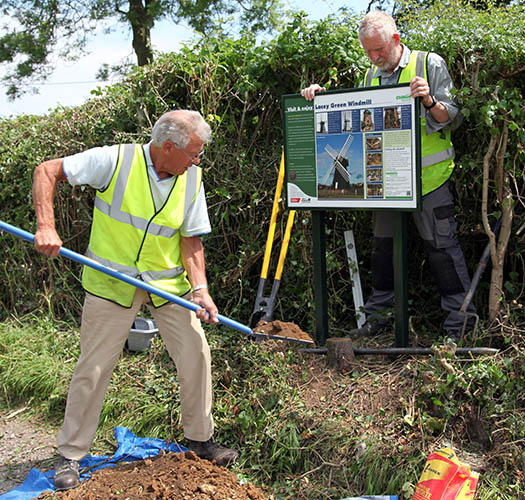 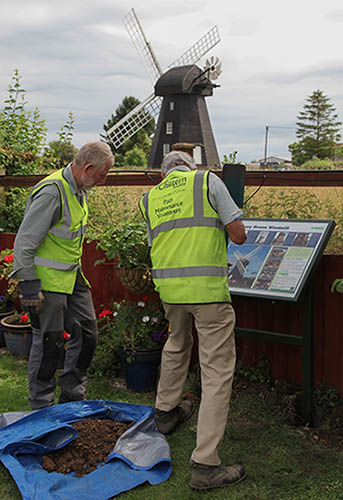 Due to the high winds with gusts of 42 mph forecast for Sunday 10th May (the remnants of Hurricane Bertha), a decision was taken at 9 am that the windmill would not be open that afternoon. During Sunday, the strongest gusts actually measured at RAF High Wycombe (2 miles South) were 33 mph. However at Aylesbury (only 8 miles North) the high winds brought down many trees in the early afternoon and metdesk.com reported that gusts reached 50-60 mph.

With the windmill being in such an exposed position on top of the Chiltern escarpment (with the tips of the sails being 800 feet above sea level), it is very clear that winds from the South and West can be accelerated, and can form very unpredictable and extreme local conditions.  The winds that the windmill did experience that day were equivalent to a winter gale.  In such conditions, or in thunderstorms, which could result in damage to the windmill, the decision has to be made that it is safest for our volunteers and visitors to close the windmill.