During 2001 the windmill did not open to the public at all, due to the restrictions placed on people visiting farms with livestock.

On 12th March 2006, the BBC's Countryfile TV programme included a look at the Chilterns by John Craven, as part of a series on different ranges of hills around the country. Lacey Green windmill was included in the programme, as well as some other local places of interest. We actually had a long morning in September 2005 doing the filming. We did manage to get the sails turning on a very clear day. 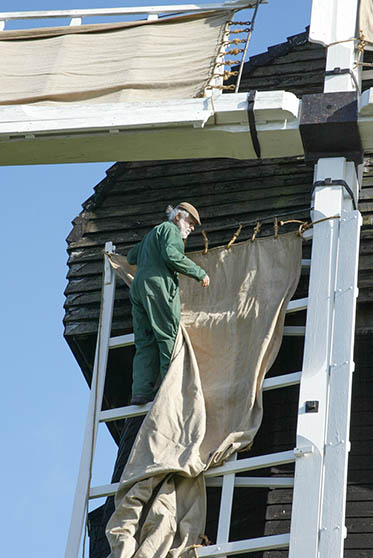 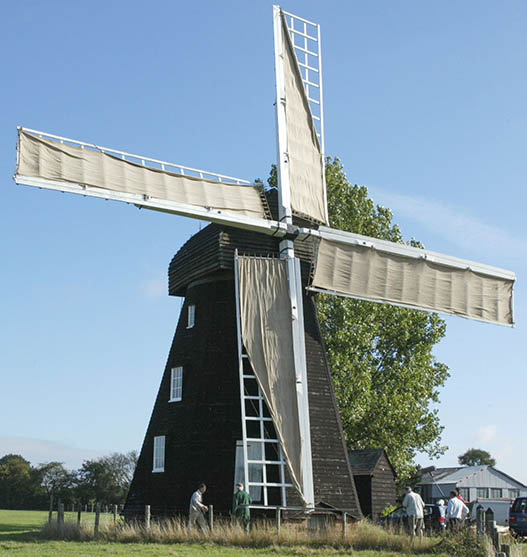 Sailcloths tied at the right settings for the wind that morning. 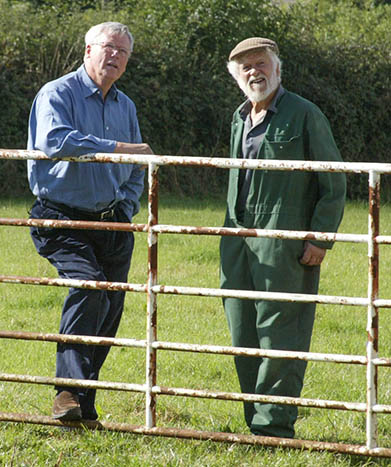 John Craven and Christopher Wallis, who looks happy to see the windmill ready. 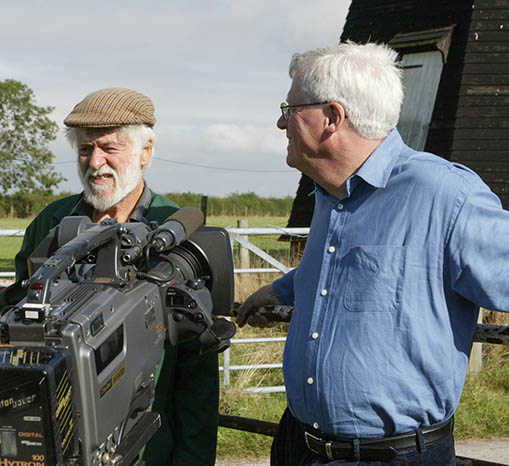 However, Christopher does not look so happy to be confronted by the TV camera.

On Saturday 6th May 2006, the windmill had a short mention in an article about windmills for National Mills Weekend. However, please do not believe that I (Michael Hardy) was ever the miller (as stated in the article).  At that time I was the Honorary Secretary of our committee. The mill has not had a miller since 1915 when it was last working. Also, Christopher Wallis was not a SPAB expert (as stated in the article). He was a civil engineer who devised the methods of restoration, and then organised the restoration of Lacey Green windmill, teaching many volunteers along the way.

After a short but sudden illness, Christopher Wallis died. As mentioned below, we had a day to remember him at the windmill just 4 days later.

As an introduction to our four pages about Christopher, please see Christpher Wallis - Introduction.

As planned, Lacey Green Windmill was open on Sunday 14th May. We were able to have the sails turning all afternoon, which we did as our small tribute to Christopher Wallis, who had died just 4 days earlier. Many people came along to remember Christopher at the windmill that had inspired him into a new career for the last 35 years of his lifetime.

For some more details and pictures of Sunday 14th May 2006, please click here.

Buckinghamshire Windmills Open to the Public in 2007

For many years, 5 windmills have been open to the public in Buckinghamshire. These are the tower mills at Quainton and Old Bradwell (Milton Keynes), the smock mill at Lacey Green, and the post mills at Pitstone and Brill. For 2007 the total was down to just 4, as Brill was not able to open at all. It is in need of some repair, but appears to have been closed on Health and Safety grounds (by its owners Buckinghamshire County Council) because of tripping hazards and low ceilings. We have low ceilings at Lacey Green, as do many mills, and all our visitors are warned that they have to take great care in such a historic building, which is something that they seem to quite accept.

In 2007 the weekend had the worst possible weather for windmills which use canvas sailcloths. Because of the amount of rain during the day (Sunday 13th May), we were not able to fit the sailcloths because once they get wet, it is very difficult to get them dry for storage. It would also be hazardous for anybody to climb wet and slippery sails. However, soon after 2 pm the rain virtually stopped until about 5 pm, and a good breeze from the east was enough to keep the sails (without cloths) turning for most of the afternoon. Due to the age of the wooden machinery, the brake wheel is disconnected from the wallower, so there is no load of machinery operating in the mill. However the wind still has to turn about five and a half tons of timber in the sails, windshaft and brake wheel. The advantage of being 750 feet above sea level is that if there is any wind at all, then we will usually benefit from it at Lacey Green.

On 19th May 2007, the Mills Section of the SPAB (Society for the Protecion of Ancient Buildings) visited some windmills in Buckinghamshire and Oxfordshire. Their first windmill of the day was Lacey Green which was bathed in sunshine following a couple of very wet weeks. There was even enough breeze to turn the sails, without their canvas sailcloths. At one time virtually all the 62 visitors had scattered themselves across the four floors of the windmill. If nothin else it proved how many people you can actually get into a smock mill.

As usual, with this type of visit by people who are mainly experts, the members varied from those who had been to the windmill many times before, through to those who were visiting for the first time. I did give tham an introduction, but we would not attempt to give such experts an actual guided tour.

To see the web site of the Society for the Protection of Ancient Buildings Mills Section, click here: Mills Section of SPAB (this link is set to open in a new window or tab) 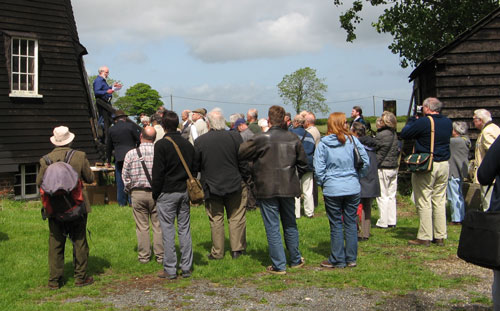 The group are welcomed with an introduction from the Stone Floor steps.

During the morning of Monday 11th June 2007, 96 children (aged 8 and 9) visited the windmill. They had previously been studying some of the history of the village. They were told how the windmill would have related to village life, and how it would have played a vital role in helping to provide food for the local people. They were then given a tour of the upper three floors of the windmill, seeing some of the mill's machinery. All the children also drew the outside of the windmill, and we were sent a whole book of their artwork, together with their thanks for their visit. Below are two examples. 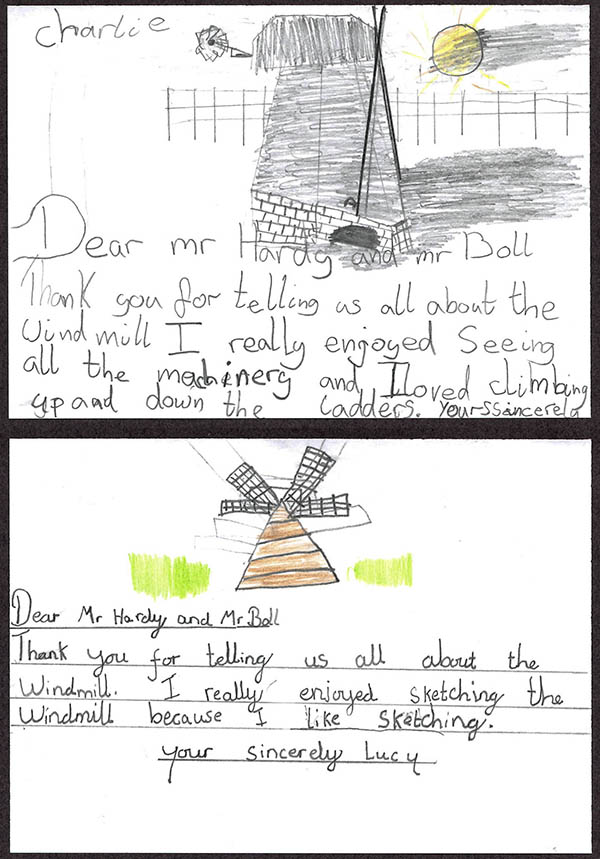 This exhibition was held at the The Environment Centre on Holywell Mead in High Wycombe between 14th July and 8th September 2007. It looked at many aspects of the life and work of this local engineer, who was promoting sustainability long before it became fashionable. For some pictures from the opening ceremony, and a list of some of the topics included in the exhibition, please click here: CW Exhibition 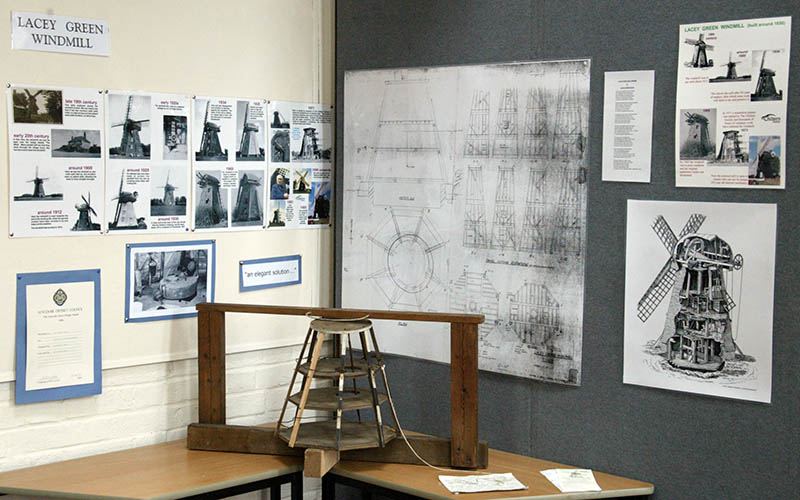 The section of the exhibition for Lacey Green Windmill