As National Mills Weekend approaches, I tend to avidly watch the 5 day weather forecast. It started looking bad for Sunday, but then improved as the day approached. There were very strong winds on the Friday, the type of day when we would not have even been able to let the sails free without the sailcloths on as they would turn too fast. I was at the mill on Saturday afternoon, when there were light winds and some sunshine, which would have been a good day to get the sails turning. However, as always, the windmill was only open on the Sunday when other activities had been planned, so it was crucial for their success that we would at least have a dry day.

On Sunday 10th May, at 06.00, the air in Lacey Green was unusually still with not a breath of wind, but it was dry. A quick check of the Met Office web site showed that it promised to continue dry, although rain would not be far away in the Midlands. However, the wind would be light and from the east. There had been some local publicity for our various activities, and I expected to see a good number of people on the day.

Robert was the first to be at the mill, I could see he was there when I was opening up our signposts at around 08.30. Robert was due to be showing people around the mill when we opened at 11.00, but he is always keen to help as much as he can with other tasks. The previous evening I had squeezed about two thirds of the second hand books into my car, 24 fruit boxes full anyway, and the car managed to get them up to the windmill. By 09.30 many people were on site, and a frenzy of activity had started, with gazebos being erected to provide shelters for book stall, plant stall and the radio amateurs.

Once everybody was busy organising their own stalls, we could turn our attention to the windmill itself. By then there was a slight breeze, but it would obviously be necessary to fit all 4 sailcloths to have any chance of the wind turning the sails. This, of couse, is even though we do not put any load on the sails, as the machinery is disconnected. If the windmill was used to actually grind flour, the miller would certainly not attempt a day's work when the wind is so light. To celebrate the special day, I also decided that we should 'dress' the windmill with traditional bunting. 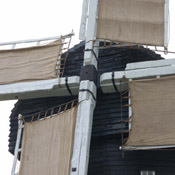 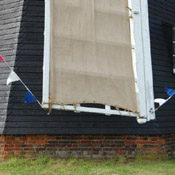 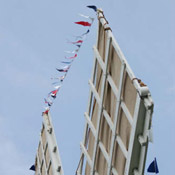 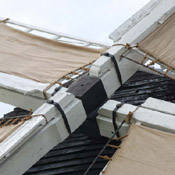 For many years Geoff has done a wonderful job of being our main volunteer to fit the sailcloths onto the sails of the mill. However, last year, having reached the age of 70, Geoff told me that he felt he needed some help in the future. Of course, there are some people who are quite happy to climb up a windmill sail, and then there are others who are not so keen. There are also others (at the far end of the scale) who could not possibly climb a sail, such as me. Whilst we were painting the smock in June 2008, I realised that one of our volunteers, Adam, seemed to have no problems working on ladders, and was venturing higher up the walls of the windmill than others who preferred to travel to the higher levels in the basket of the cherry picker. I therefore asked Adam if he would be prepared to help us with the sailcloths, and was delighted when he said that he would. In April 2009 I got to know another local man, Carl, who also volunteered his help with the windmill. He made the mistake of telling me that he had spent a brief spell as a tree surgeon, so I asked him he if he would be prepared to tackle climbing the sails. He agreed, for which I was again very grateful.

So, on Sunday 10th May, we were in the rare position of being able to fit the salcloths with the help of 2 new and younger recruits, and at about 10.00 their training in this new skill was started. We fitted all the bunting first, and then Geoff fitted the 1st sailcloth to demonstrate what was involved. We use a pulley to haul the sailcloth up, but there is still a lot of heavy work involved at the top of the sail to secure the cloth. Carl decided he would tackle the 2nd sail, but despite a little apprehension, he did a good job. Of course, just imagining climbing a sail can be very different from actually looking up at the sail soaring above you from the ground. As in most things, the first time is usually the most daunting. However, one must never become complacent about what is involved, and where you are working. 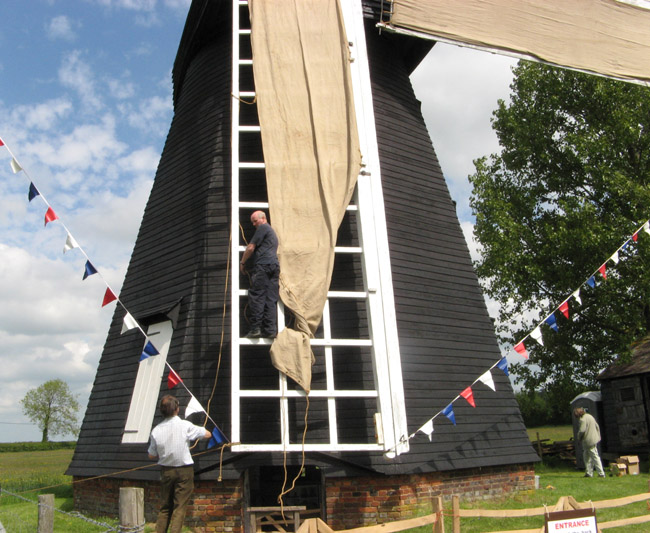 Adam (in the photo above) then tackled the 3rd sailcloth, and treated the job like a true professional, as I expected he would do. The photo above shows him descending the sail, tying it under Geoff's instructions from below. By then, Geoff must have feared that he could be made redundant, and he insisted on fitting the 4th sailcloth himself. The photo below shows Geoff has attached the top of the cloth and is starting to run the cloth down the sail. 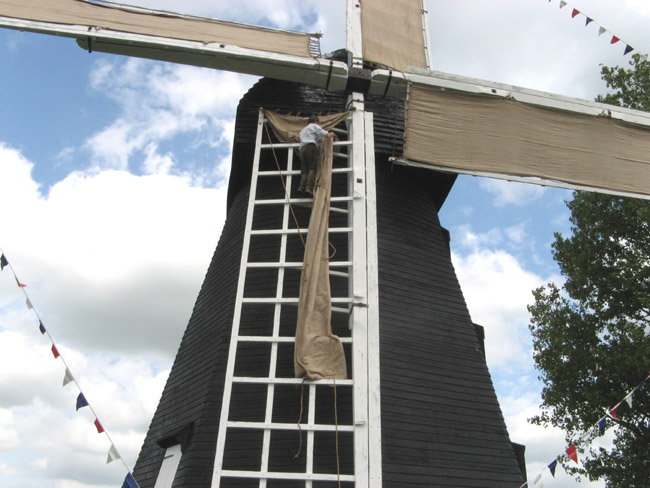 Whilst they were doing this, I have to fit up the barriers to keep people away from the turning sails. The wind was due to come from the east, which means that the sails would face the driveway giving visitors a good view of them. However it means that we cannot use the normal entrance dooway, but have to use the back door instead. This means that a large area has to be fenced off, as seen below. 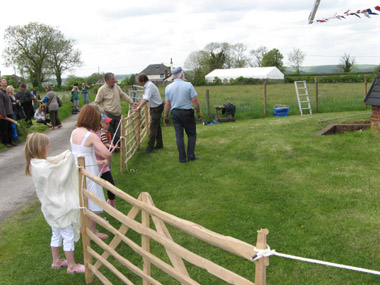 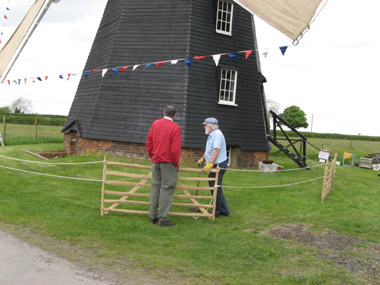 The wind on the day proved to be too light, the sails being very reluctant to turn. Most of my time during the day is spent making sure that all is as safe as possible, and that the fantail is keeping the cap in the right direction according to the wind. This proved difficult when the wind turned to the north-east. From that direction it is filtered by trees close to the mill, but the wind was not strong enough to turn the fantail. Around 16.00 the wind must have increased and the cap suddenly turned, which meant a rapid adjustment of our barrier was necessary. 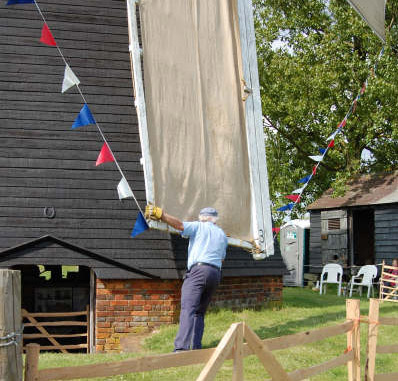 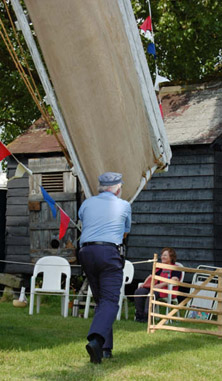 Otherwise, on such a calm day, I have to give the sails repeated nudges to get them moving a little. I hope that at the very least, everyone who walks up the drive sees that the sails can turn, even if by man power rather than wind power. 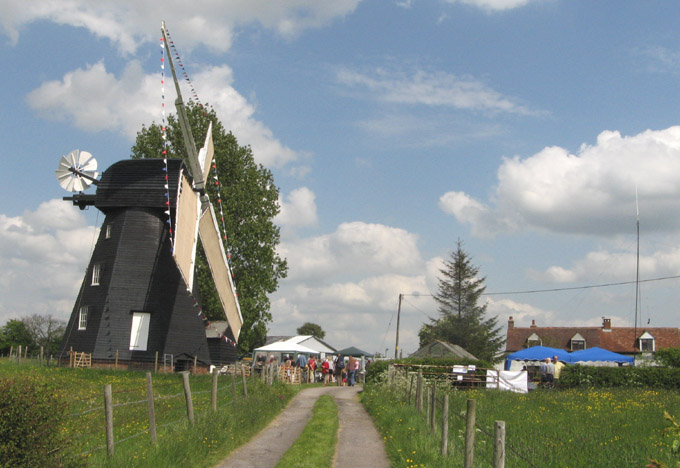 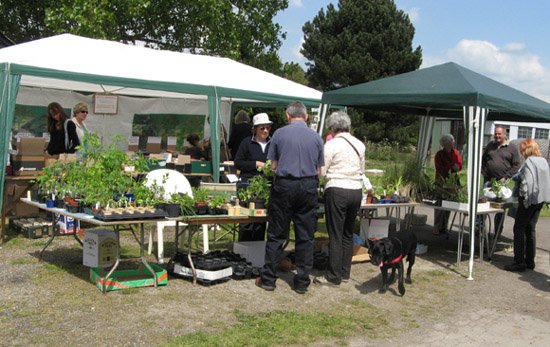 Above is the Horticultural Society's Plant Stall, where they did a good trade, the same as in 2008. They have a page on the village's website which can be visited by clicking here: LR&LG Hort Soc (This link is set to open in a new window or tab)

Above is Betty's Bookstall, with many books all given by local people and others who are interested in Lacey Green windmill. 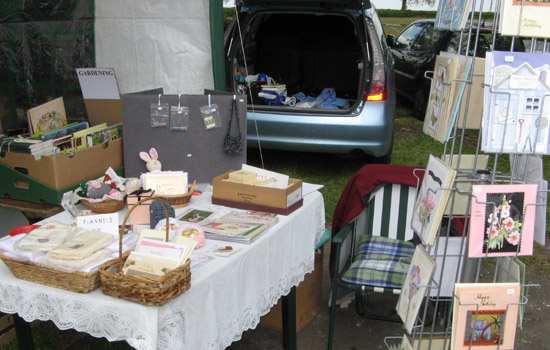 This shows Carol's cards and crafts. 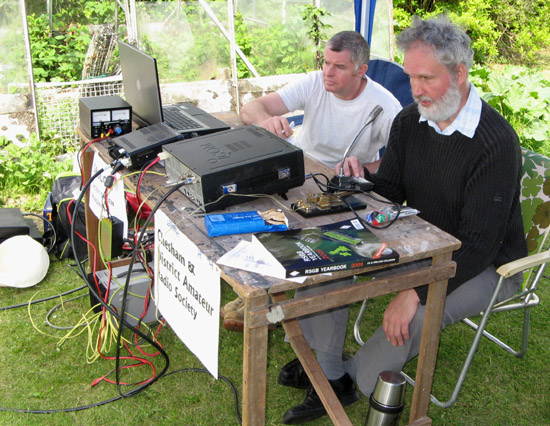 This photo shows members of the Chesham and District Amateur Radio Society operating. Many visitors to the windmill looked in to talk to them, so they were able to tell them about the activities of Radio Amateurs. During the day, using the Special Event callsign GB0LGW, they contacted 60 other radio stations, of which 14 were at other mills in the UK, and one in Holland. This seems to have been exactly the same number of mills that they spoke to last year. The mill furthest away was Benholm Watermill which is on the east coast of Scotland, between Aberdeen and Dundee. Details of their website are on our page for National mills Weekend 2008. 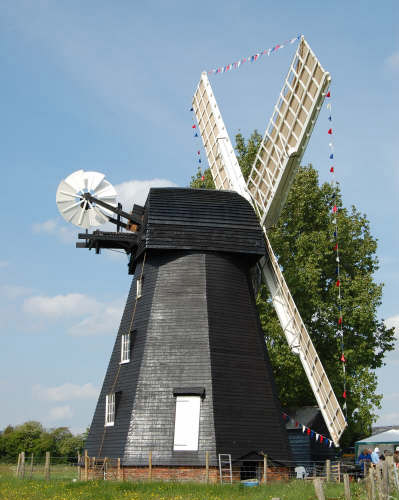 We were pleased to welcome the Loosley Row and Lacey Green Horticultural Society, and the Chesham and District Amateur Radio Society to Lacey Green windmill for the day. They each had lots of their own helpers, who all contributed to the success of the day. I would like to thank Alice for some of the photos that I have used on this page.

We are very grateful to all the people who helped us on the day. Handling the sails were Geoff, Adam and Carl. Helping us to open the mill were Robert, Denise and Chris in the morning, and David, Christine and Tony in the afternoon. We were also very grateful to Betty and all her helpers (Pat, Joyce, Sue and Rita) with the secondhand bookstall, and all the people who donated the books. We are also grateful to Carol with her card and craft stall, and for supplying the gazebo for the bookstall. It is impossible to mention everybody, but John and Laura are a couple who are always prepared to volunteer their help, without even being asked.

The mill was open from 11.00 on the day, and we had a good number of visitors in the morning as well as the afternoon. During the day, a total of 230 people went inside the mill (166 adults and 63 children). I was also very glad to see so many people come to see the outside of the mill and the other activities. I estimate that we could well have had 1,000 people walk up the drive during the day.