This is written in memory of a dedicated and knowledgeable mill enthusiast who volunteered at Lacey Green Windmill for around 40 years.


Geoff Giles’s working life was in printing, with the large printing companies in Watford. Geoff always had a keen interest in all aspects of industrial archaeology and canals, as well as passions for sailing and walking, in the Chilterns and much further afield. His interest in mills developed over many years, and he was a keen attendee of meetings and tours of the Mills Section of the Society for the Protection of Ancient Buildings. He developed a great knowledge of the intricacies of how mills developed in different regions of the country. Geoff's other interests included walking, sailing, tending his allotment, and all aspects of Industrial Archaeology. In recent years he also became more interested in church architecture, having joined church tours that I organized for the Buckinghamshire Archaeological Society.

He worked on the restoration and subsequent maintenance of Lacey Green Windmill for around 40 years, although our records do not tell me exactly when he started. I only arrived at Lacey Green in 1984, once the main structural work of the restoration had been completed, and Geoff was there very regularly, working on the machinery inside the mill as well as helping to complete the fantail mechanism, which has now kept the cap and sails facing into the wind since 1986.

By 1990, for various reasons, we had lost most of the volunteers who had helped with the restoration since 1971. However, for around 15 years (1990-2004) Geoff single-handedly took on the task of repainting the 8 walls of the mill and the 4 sails, probably doing them all twice over those years. He worked for at least 6 months every year on alternate Sundays, being quite content to work on his own, always instinctively finding something that needed to be done, and just getting on with it.

It was not until 2008 that I instigated working parties for 2 to 3 weeks to tackle the painting work, when we used a cherry-picker and we were able to access the roof of the cap for the first time in 30 years, since it had been re-fitted in 1978. However, Geoff would be there to play his part along with others.

It has to be said that his techniques did not always precisely meet our modern Health and Safety standards, with the procedures that we all now have to lay down, and try to follow. Geoff earned the reputation of being our “cat with nine lives”, and he had accidents at other places, but fortunately not at Lacey Green.

He would never take on the task of showing people around the windmill on our open days, but when he was working at the mill and casual visitors turned up, he would be delighted to leave what he was doing, and give people a real ‘hands on’ tour of the windmill. For some years we let the wind turn the sails of the windmill for National Mills Weekend each May. Geoff was always keen to climb up the sails to fit the sail-cloths until 2014 when he was 75. We then, partly because the weather was becoming more erratic, took the decision to stop letting the wind turn the "free-wheeling" sails. There was an increasing worry that we would not be able to stop the sails turning in a sudden strong wind.

As soon as Christopher Wallis started the re-assembly of Chinnor Windmill in the early 1980s, Geoff joined the volunteers there, and spent many years alternating his Sundays between Lacey Green in Buckinghamshire, and Chinnor in Oxfordshire, despite living in Hertfordshire at Berkhamsted.

Geoff’s health deteriorated in recent years, and he died on 4th November 2020. He left a legacy of £5,000 to The Chiltern Society for the purposes of the maintenance and restoration of Lacey Green Windmill. The sails of the windmill were fitted 40 years ago, but have lasted far longer than most windmill sails fitted in the second half of the 20th Century, which is due to Christopher Wallis’s skill in choosing the best timber. However, the sails will soon need some expensive repairs. I can think of no better use for Geoff’s Bequest, than to enable Lacey Green Windmill to keep its iconic sails, which he maintained single-handedly for so many years. He was also essential in getting the sails turning until 2014, and in teaching the skill to other helpers. The sight used to delight many visitors, some of whom travelled long distances, and would return each year. 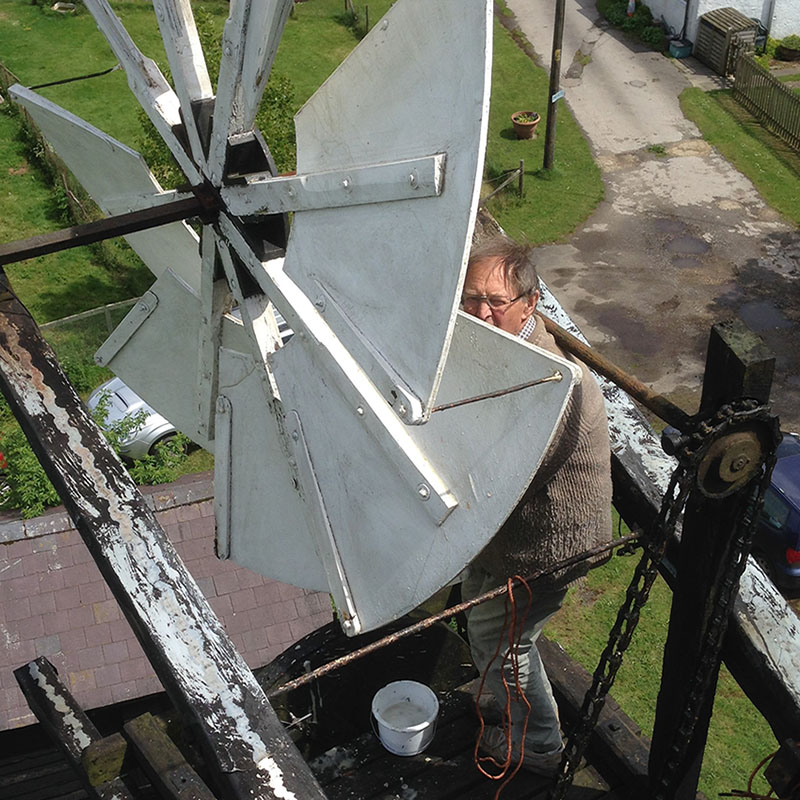 2017: A fairly camera-shy Geoff painting the fantail at Lacey Green, ignoring the fact that his own car is parked nearly underneath.