2017 Painting of Smock and Cap, and Fan Mechanism Repairs


Painting of Smock and Cap

Having painted the sails in 2015, I had hoped that we could repaint the Smock and Cap in 2016, as it had not been done since 2008. For various reasons (in particular family ones) I had to put the work off until 2017. However our usual stalwart volunteers were willing to help again, and I was able to form a rota for a couple of weeks work. I was relieved to be able to leave myself off the list for some days, as Mark was happy to take turns in running the operation.

We had decided that before painting, we needed to have a concerted effort at cleaning off more of the old material than had ever been done since the weatherboarding was first painted 37 years earlier, in 1980. This took considerable time with a combination of scraping and brushing, and was extremely dusty work. It meant that by the end of the day our volunteers often looked as it they had spent the day working in a coalmine, but of course, we did not have any communal shower facilities for them. 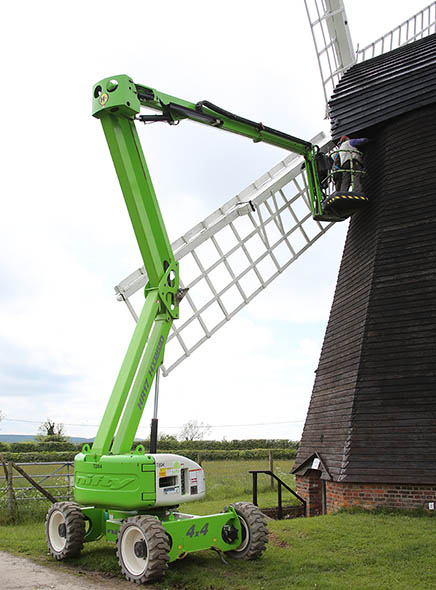 Scraping from top to bottom, here reaching under the cap. 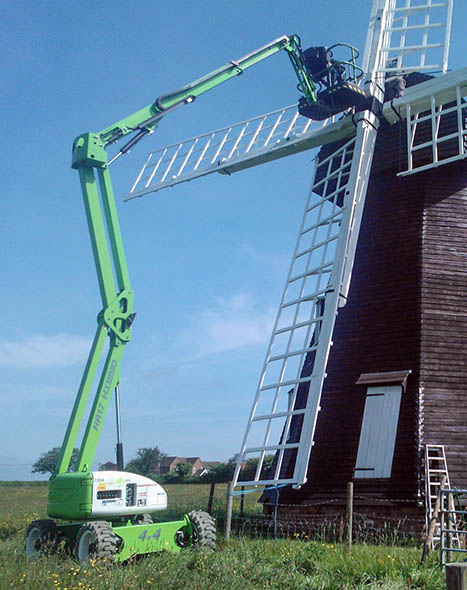 The only way to reach the top of the cap front is to work off the horizontal sails.

By the end of 2 weeks work, when the weather was generally kind to us, we had used 100 litres of paint giving the smock, cap, and fanstage 2 or 3 coats. The apex of the cap is 40 feet or 12.2 metres above the ground, so we have to hire some fairly substantial access equipment in the form af a cherry-picker. This session was the fourth time we have used such equipment, and experience has now shown which is the best size and most reliable make of equipment to use, bearing in mind we have to work on some rough and uneven ground, and have the capacity to reach, in some cases over a fence, right over to the top of the cap. Also having confidence in a machine is a great asset. 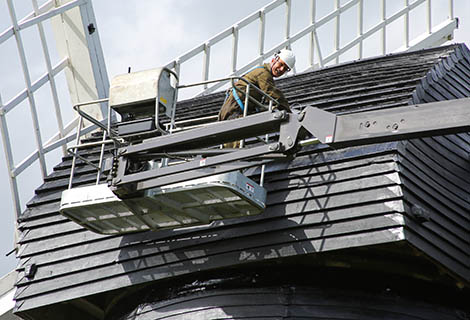 Working on the roof of the cap. 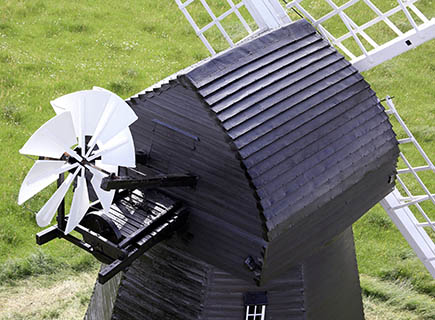 An unusual view, but good place to admire our finished work.

Whilst we had the cherry-picker, our millwrights replaced a piece of timber on the edge of the fan stage, and coincidentally a long standing problem with the fantail drive and rest of the cap turning mechanism got worse. Incidentally this whole mechanism can be known as luffing gear, or winding gear, as it luffs or winds the cap of the windmill to keep the main sails facing into the wind.

It had become noisy occasionally, but like many intermittent faults, the problem was proving difficult to diagnose, although it soon became apparent that it was having a detrimental effect on the whole fanstage. Eventually we were able to cure the problem, and together with our millwrights, were able to make various adjustments and repairs to those essential working parts of the windmill.

The whole mechanism actually works very hard, and usually very reliably, constantly keeping a total weight of 9.5 tons turning on the Smock, to keep the cap and sails facing into the wind.