The weather is always crucial in deciding if we can get the sails turning on the Sunday of National Mills Weekend, which was the 15th of May in 2011. When I started to put out our 'Windmill Open' signs, there was a clear blue sky. The previous few days had been quite windy, but we were in the middle of a long drought which had lasted many weeks, in fact there had only been one April shower in the whole month. The forecast for the Sunday was dry, with a westerly wind of 11 mph, but gusting up to 29 mph. For this reason Geoff and I decided that we would just have one pair of sailcloths on the mill, and we set about getting things organised. By 10.00 the Horticultural Society were setting up their Plant Stall, and the blue sky had disappeared, not to be seen again for the rest of the day. John and Luke, who both helped us for the first time in 2010, were there to fit the sailcloths. 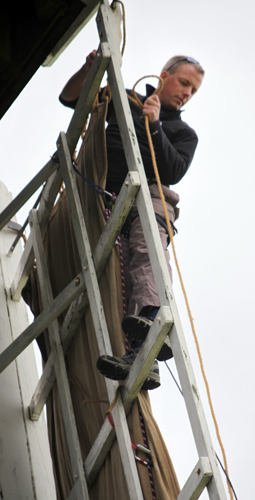 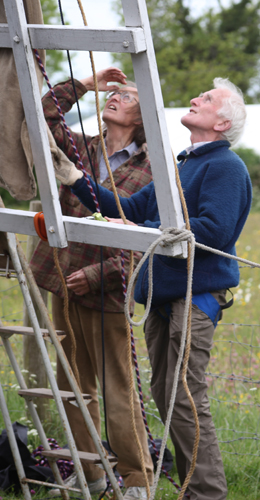 Above, Luke has ascended the first sail, he is tying the cloth on, Geoff and John watch from below. For the rest of the morning the wind was as forecast and the sails turned well, at a good safe speed (remembering that we do not run any of the old machinery in the windmill, so the sails, windshaft and brake wheel are just free-wheeling).

By lunchtime there was quite a drizzle (despite the fact that no rain was forecast anywhere south of Yorkshire all day). By 2 pm there was virtually no wind, and the sails would not turn at all, even when given a prompt by hand. In the middle of the afternoon, we discussed whether we should fit the other 2 sailcloths, and as John was happy to ascend the sails for the task, they were soon brought out from their storage space in the granary.

In the above 4 photos, we see John has climbed the sail, secured himself, and fixed the hoist so that the sailcloth can be hauled up the sail. John is then hooking the sailcloth onto the sail rod. 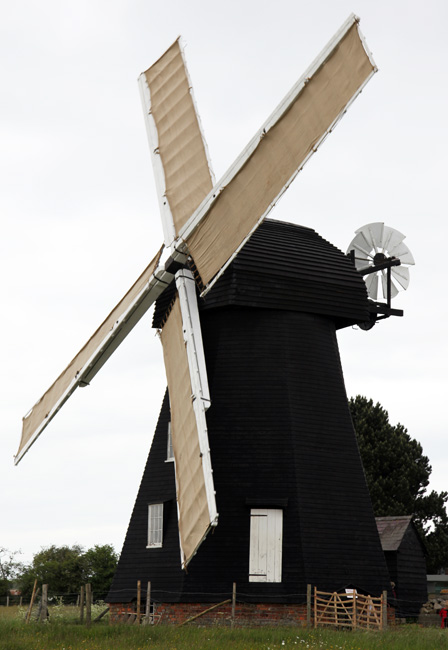 Unfortunately, by the time the 3rd and 4th sailcloths were fitted, the speed of the westerly wind had picked up again. It was therefore with a little reluctance that we released the brake, after which the sails turned for a considerable time, and soon rather faster than we would have liked them to. It was not possible to stop them with the brake until they had slowed down, and there is no other realistic way of stopping the sails. However, eventually the wind dropped, the speed of the sails slowed, and Geoff's skillful handling of the brake managed to gently stop them. We were then able to remove all the sailcloths (which had all been given a rapid spin dry by the wind) and clear everything away by around 5.30.

We are very grateful to all the people who helped us on the day. Handling the sails were Geoff, John and Luke. Helping us to open the mill was another John, Robert, and Denise in the morning, with Chris, Marian and yet another John in the afternoon, all assisted by Betty. During the day 179 people visited the inside of the windmill, and as usual, at least twice as many walk up to the outside. 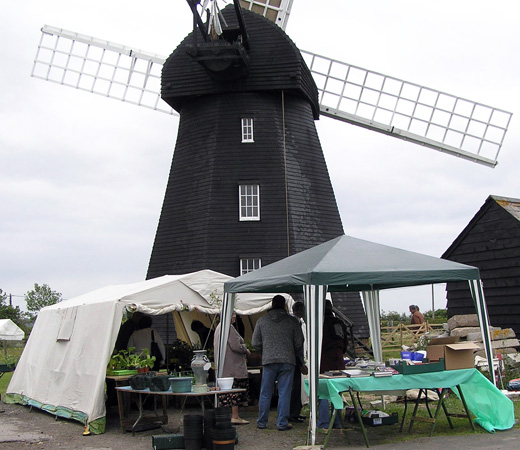 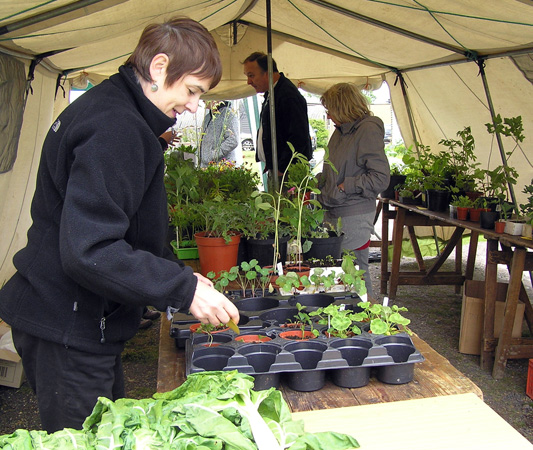 The Horticultural Society's Plant Stall was well visited as usual, and once again had an impressive selection of stock for sale. These 2 pictures were taken by Norman.