The windmill was open on Sunday 14th May. Only 4 days before, Christopher Wallis had died after a short illness. I decided to dedicate the day's running of the windmill as a tribute to Christopher, and our 'sailing' day for National Mills Weekend 2006 became a special day which I know some of us will always remember.

Three of us met in the morning to prepare the mill, and before long a light drizzle had set in. There was so little breeze that even the mill was confused about the direction of the wind, and we had to start turning the cap by hand, before the fantail carried on the work of turning the cap to face a gentle breeze from the NE. We were determined to get the sails turning, but knew it might only be possible with all four sailcloths on. Geoff is our fearless member who is prepared to climb the sails to fit the sailcloths.

To try and help him, I had purchased a simple pulley and line, so that we could haul the sails up to him from the ground. After a little practice, this seemed to work quite well. By the time we got all the sailcloths fitted, the rain had stopped, and it was time for our sandwiches. Afterwards we had to fence off the side of the mill where the sails were, which is essential to stop anybody walking into the turning sails. 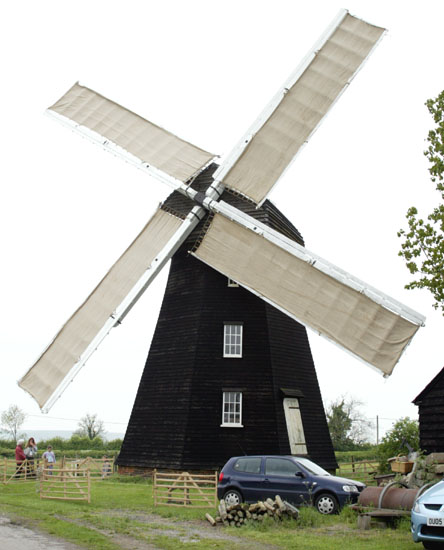 In the early afternoon, it seemed as if it would be another of those days when the sails would only turn with manual intervention, which usually means me using my weight to push them before they stop again after a couple of revolutions. However, by 3 o'clock the wind had picked up enough to keep the sails turning for the next 2 hours. They turned at a reasonable speed, but we do not run any machinery in the mill, so a much stronger wind would have been needed to actually use a pair of millstones.

I had tried to inform all our helpers of the sad news of Christopher Wallis's death. Many of them called in during the afternoon, to remember Christopher and his achievements. They had known him for up to 35 years, when he started the restoration of Lacey Green windmill. Others had never met him, but all had a great respect for the work he did, and the inspirational effect he had on other people.

A large number of people visited the mill during the afternoon, many content to just watch the sails turning. However, 188 people went inside the mill, keeping our volunteer guides very busy. With a coinciding event at 'The Whip', people did not even seem to be deterred by the way the parking problems of a modern city seemed to have reached the village.

Many people asked how the sailcloths were fitted. The answer is that it was purely thanks to Geoff who climbed each sail to fit its cloth. The sails themselves vary in weight, and the cloths have to be fitted in a certain order, to keep the sails as balanced as we can. For some photos of fitting the sailcloths in 2011, see 2011 - National Mills Weekend

Thanks to Chris Miller's photos below, you can see the reverse process, removing the sails, after 5pm on Sunday 14th May 2006.

Each sail is moved to the vertical position, and its sail cloth is gradually untied, working from bottom to top. After the last rope is undone (see below), the cloth will be pushed to the left and off the sailcloth bar, to fall down to the ground. 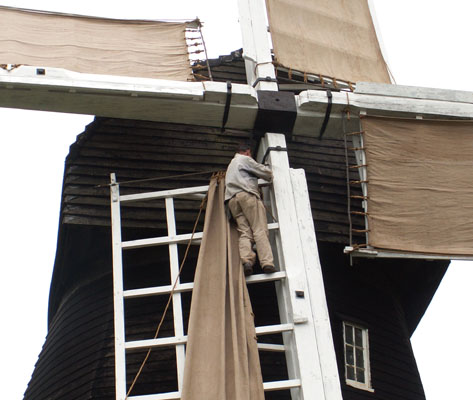 Our activities on the 14th May 2006 had undoubtedly been the most appropriate way to remember Christopher Wallis, just 4 days after he had died, having been so deeply involved with Lacey Green Windmill for more than half of his lifetime.