for 50th Anniversary Year of Chiltern Society and Chilterns AONB 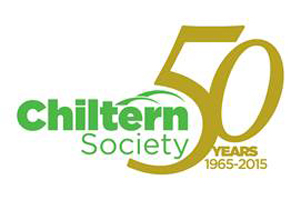 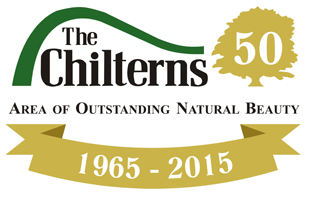 2015 Painting of Sails and Window Repairs

In May and June 2015 a willing team of our volunteers painted the sails, windows, doors and fantail of the windmill. However before we could start the painting, we knew that five of the windmill's windows needed some serious attention, so we had to investigate them first. We took out 5 windows which all needed repairs, as well as the sills that they rest on. I have written an illustrated article on its own page about the large amount of work that was done, so rather than repeat some here, I will just show a couple of photos here. For the full article, please click here: PAINTING-2015 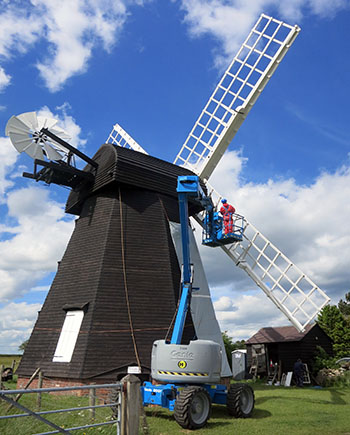 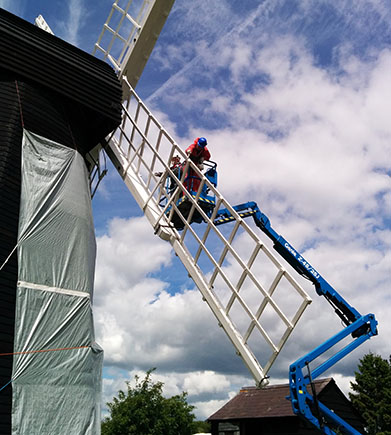 The Alvis Register is a club for the owners of these famous vintage cars, covering all the models produced between 1920 and 1933. The cars have an incredibly diverse look, for as with many car makers at that time, Alvis only produced a car chassis with all the running gear, leaving the actual coachwork (or body of the cars) to be made by many specialist coachbuiders. Alvis kept producing cars right through to 1967, and there is a different organisation which caters for them, called the The Alvis Owner Club.

The Alvis Register organise many events for their members, including regular weekends away. They asked if they could visit the windmill on a Saturday morning, and as they are engineering enthusiasts, they thoroughly enjoyed seeing the "basic 17th century engineering" of the windmill. Whilst others showed them the windmill, I spent a damp morning looking after their parking in the Pink Road, and took the opportunity to photograph most of their cars.

On their way to Lacey Green, from a hotel in Oxfordshire where they had stayed the previous night, many of the owners could not resist the temptation to drive their cars up Kop Hill (which is only 2 miles away from the windmill). That was an added bonus for the cars' owners, but I understand it proved a bit of a challenge for a couple of the cars, which must have had an average age of around 90. 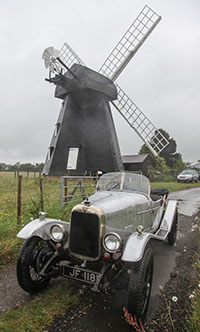 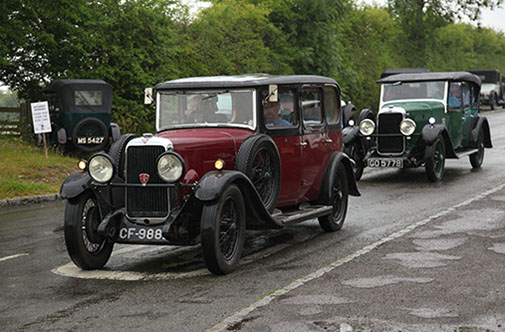 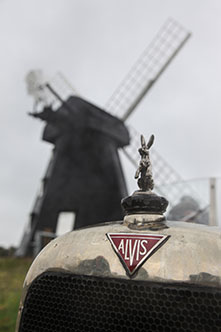 The Alvis Register's website can be found by clicking on: Alvis Register (this external link is set to open in new window or tab)

I will also put a selection of my photos of individual cars on their own page on this website.

Lacey Green Windmill was fitted with two patent sails (we estimate in the early 19th century, possibly around 1820). When the Restoration started in 1971, most of the mechanism was still there, although in a dilapidated state. Some years ago I gathered samples together, down on the Meal Floor, fixing the long items, (striking rod and sail rod) underneath the floor above, and gathering examples of all the smaller items on a board. All the items are labelled, and referred to on a master diagram, shown below. It also shows the rather unusual "Rocking Lever" control mechanism. 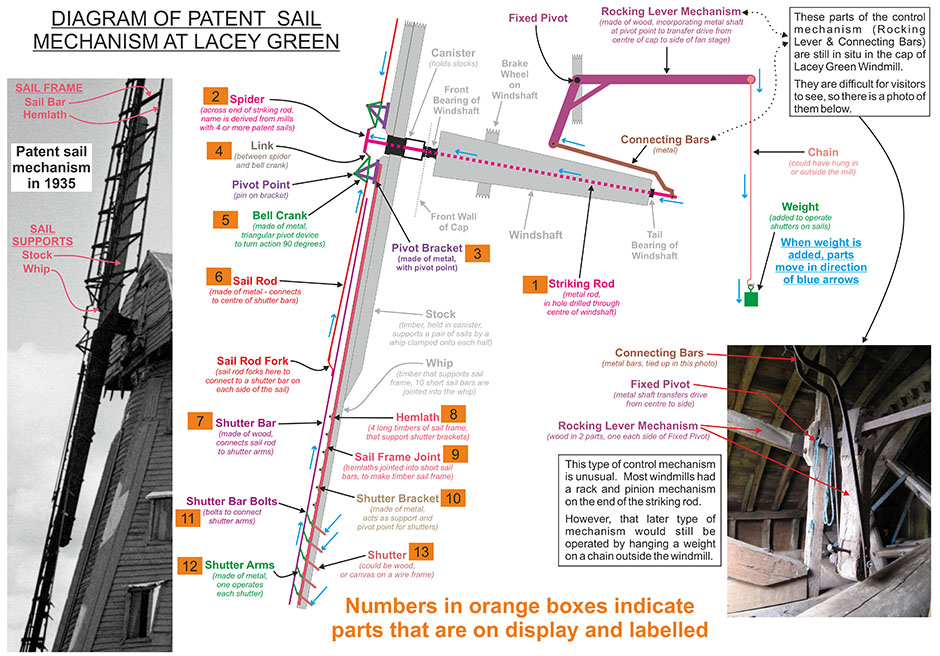 Explanatory Diagram on display in the windmill

Over the winter of 2015/16 one of our volunteers (Alan) worked hard in his shed building a reconstruction of how the crucial part of the Patent Sail control mechanism worked. A slight movement of the striking rod (through the centre of the windshaft) had to be turned 90 degrees into a longer movement of the Sail Rods, which in moved the Shutter Bars along the Sails, to operate the Shutters themselves, giving an immediate response to the speed the mill was operating at.

Our original Pivot Brackets and Bell Cranks have laid loose on the floor for some years, probably not meaning much to most visitors. However now they have been combined with dummy Spider, Striking Rod and Sail Bars to make a full scale working replica, down at floor level, where it can be easily seen and understood. We are very grateful to Alan for giving these items a new life, and making them understood by visitors.

Following 2015, when we opened in April for the first time as an experiment, and to mark two 50th Anniversaries, it was decided to open in April again for 2016. As Easter was right at the end of March, we also decided to open for Easter Sunday and Monday. We would therefore be scheduled to open on 32 days between 27th March and 25th September. The weather can be rather more of an issue in March and April, as it did actually turn out to be (see the next News Item).

Having opened on Easter Sunday (27th March), unfortuntely we could not open on Easter Monday. Due to the high winds with gusts of 50 mph, from "Storm Katie", forecast for Monday, a decision was taken at 8.30 am that the windmill would not be open that afternoon.

With the windmill being in such an exposed position on top of the Chiltern escarpment (with the tips of the sails being 800 feet above sea level), it is very clear that winds from the South and West can be accelerated, and can form very unpredictable and extreme local conditions. In such conditions, or in thunderstorms, the decision to close the windmill is made for the safety of our volunteers and visitors.

We hope that anybody who made a journey to Lacey Green can return another day. The closure was shown on this website, and notices displayed at the end of the footpath to the windmill.

Since the early 1980s we have had some wooden steps from the North side Stone Floor door down to the Ground. They had to be removable when we were turning the sails. However, as we do not now turn the sails (since 2014), and the steps were certainly past their prime, having been repaired twice, in March the Restoration Committee decided that they should be replaced. Remarkably, two of our more recent volunteers made and fitted a new set of steps just five weeks later. The chosen material was wood, but the steps now rest on a very large piece of Granite Stone. The steps are essential as they form the only emergency exit from the windmill. 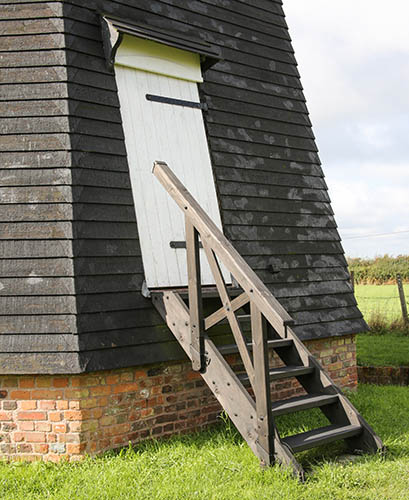 The entrance to the windmill is via brick steps down to the Meal Floor which is in a semi-basement, so below ground level. The process of going down to get into a windmill is itself unusual. Many people, including some of our more mature volunteer wardens, have suggested that a handrail on the steps would be useful. Again (like the wooden steps mentioned above) in the past it would have been impossible to have a permanent handrail, when we let the sails turn, as the sails come down below the bottom of the timber smock. However, without the sails turning, it is not a problem, and a means of constructing and fixing a handrail has been devised, and has been much appreciated by all who use it. 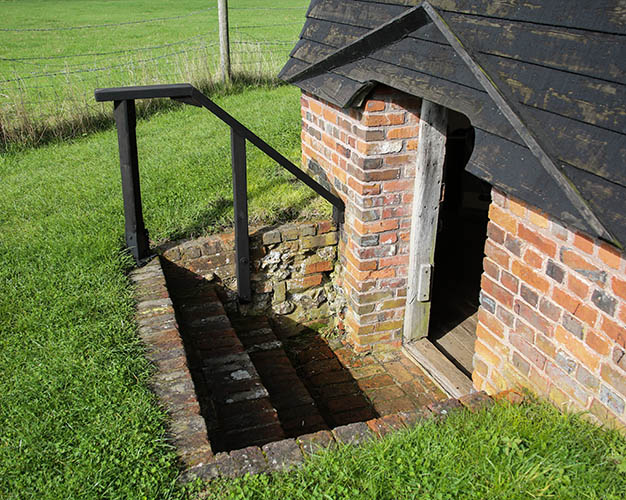