As usual, the windmill was only open on the Sunday, which was the 11th May. We had some publicity in the local press (particularly the Bucks Herald) and with the promise of a fine day, I was expecting to see a large number of visitors. Geoff (up the sails) and myself (firmly on the ground) had the sailcloths fitted by 10 o'clock. As it was a special occasion, with two other organisations visiting the windmill, we also decided to dress the mill with her bunting, a traditional way for a windmill to celebrate a special occasion. 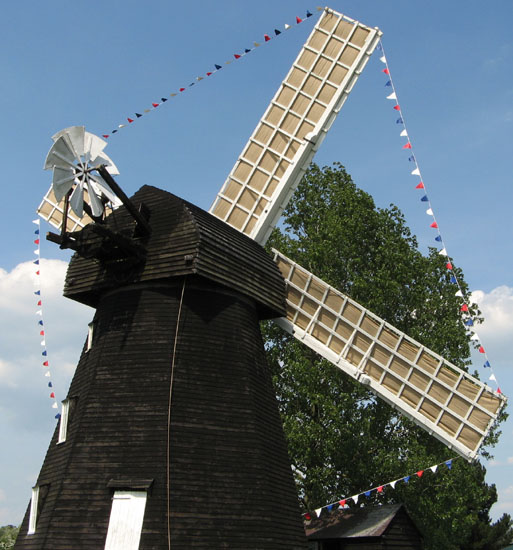 Sails ready for the day's activities

The only thing missing during the morning was any wind, always a disadvantage for running a windmill. By then, the Chesham and District Amateur Radio Society had arrived to set up their new gazebo and aerials ready for operating. They were due to be situated on the top edge of the field to the right hand side of the drive, but the grass (grown as a hay crop) had grown so much taller than usual, following a sunny February, wet March, and wet April, it was mutually agreed they would be better off just in the farmhouse garden. As soon as they had moved their apparatus into the garden, then the local Horticultural Society started to arrive with their tables and gazebo, closely followed by a stream of plants being delivered.

Geoff and I erected our rustic hurdles as a barrier to keep visitors away from the sails and I put up a selection of pre-prepared signs telling visitors that the windmill was open, where to leave their cars, how to get into the windmill, and warnings of specific hazards, such as a step up into the field on the route to visit the Radio Amateurs. Fortunately I did not need the one we used in 2007 telling visitors that we were unable to fit the sailcloths due to the wet weather.

Robert was able to start showing the first visitors around the mill about 11 o'clock. He was joined by David, Christine and Betty who looked after our visitors throughout the afternoon.

By midday, there was a gentle breeze that was enough to keep the sails turning for a few revolutions once they were given a good push, to remind them what they are really there for. As they usually have 364 days rest each year, we expect them to perform on this one crucial day each year. 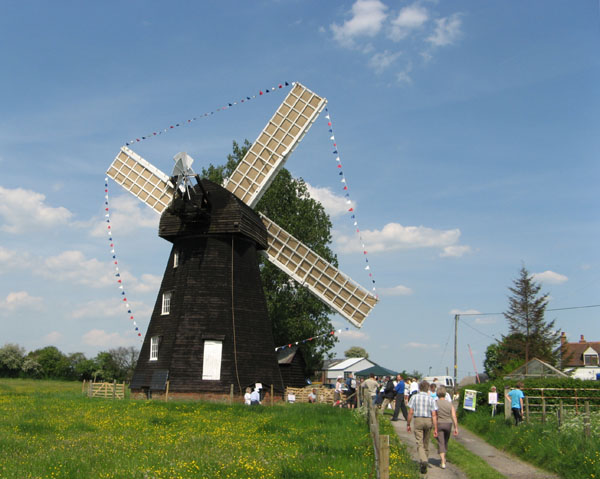 View looking up the driveway

After lunch, there was a constant stream of visitors coming up the drive, and by 3 pm the temperature was 24.1 degrees C. This was the figure measured at RAF High Wycombe, just 2 miles to the SE of the windmill, although it probably felt hotter to most people that afternoon. Also, by the middle of the afternoon the wind was more constant, about 10 mph from the NNE, with some stronger gusts. For a couple of hours it was then strong enough to keep the sails turning most of the time. From that direction the wind is filtered by a pair of poplar trees that are close by, so the mill still needed four full sailcloths, and the sails seldom reached their optimum running speed of 15 rpm, which is a sail passing a fixed point every second.

I should explain that we do not put any load on the sails, as we do not run the internal machinery of the mill due to its great age. Therefore, the wind would certainly not have been strong enough to turn the sails if we actually used the mill to grind flour. 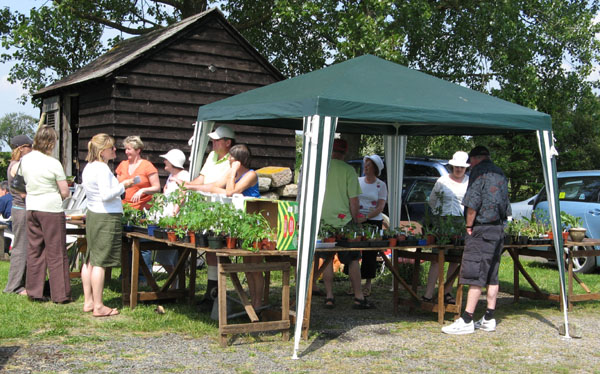 Loosley Row and Lacey Green Horticultural Society's plant stall, starting out with six tables full of plants, which nearly all sold by the end of the afternoon.

Some people were making a deliberate journey to the plant stall, whilst others came across them as they were visiting the windmill. The sunshine meant that some of their plants needed reviving with water, whilst people visiting the site had the option of reviving themselves at the local pub's beer festival. 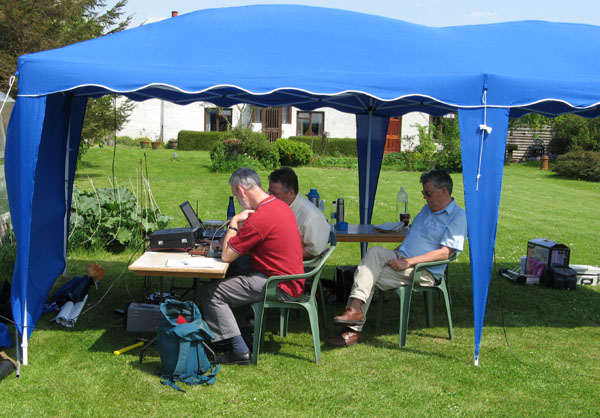 The Radio Society told me that they were also affected by the weather, as thunderstorms in Wales were causing a lot of interference. Many visitors to the windmill looked in on them, and were able to have their questions answered about some of the mysteries of amateur radio. They had some technical problems with their aerial, which made their transmitter run on lower than ideal power output. Despite this they managed to speak to Schonefeld in Germany (600 miles away). Of most relevance to National Mills Weekend, they spoke to radio amateurs at around 14 mills in the UK, and 1 in North Holland.

Their website can be visited here: C&DARS (This link is set to open in a new window or tab) - NB (added in February 2018): The Radio Society now operate at Brill Windmill on National Mills Weekend. 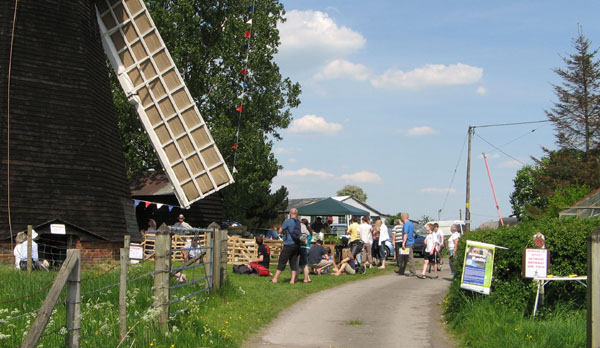 In this photo, you can see that many people were quite content to stand, sit, or lie and just watch the sails of the windmill turning.

A total of 203 people went inside the mill (154 adults and 49 children). This was the most visitors inside the mill that we have had on this occasion in the last 19 years. As soon as we do get the sails turning, people will just turn up to have a look. I was able to count the number of people coming up the drive at different times of the day, and I estimate that around 600 people visited the site during the day. 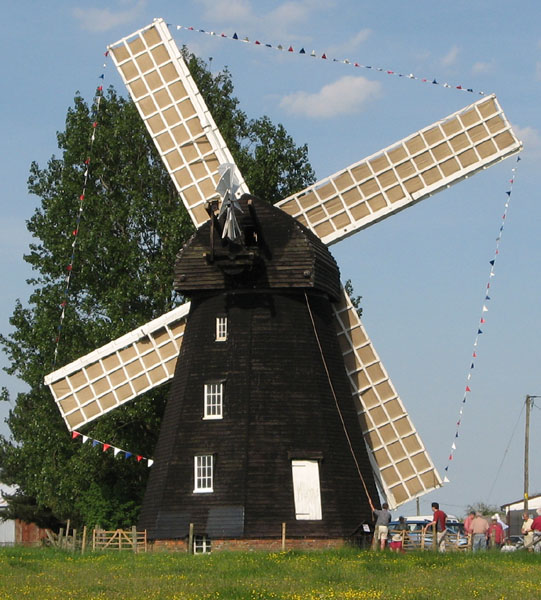 My final picture shows Geoff pulling on the brake rope to stop the windmill so that the sailcloths and bunting can be removed and put away for the next occasion.

For some detailed pictures of removing the sailcloths in 2006, see 2006 - National Mills Weekend

We were pleased to welcome the Loosley Row and Lacey Green Horticultural Society, and the Chesham and District Amateur Radio Society to Lacey Green windmill on this occasion.

During the day many old friends of the windmill came to see us, it is always good to see them, as well as people who have never visited any mill before. Above all, a successful day like this always reminds me that it would never have been possible without the many volunteers who persevered to restore the windmill, who now maintain it, and who help us open it to the public. We are grateful to them all over the last 37 years.