In accordance with Government guidelines, this decision was taken in the interests of our visitors and our volunteers.

Updated 29th September 2020 - The situation for 2021 will be reviewed nearer the time. "Social Distancing" would be impossible within the windmill, as well as other precautions, particularly everybody having to touch ladders within the windmill.

WE HAVE TWO OTHER PAGES ON OUR EHA : 2013 EHA Summary Page 2013 EHA Full Text of Speeches (pdf set to open in new tab or window)

On Sunday 14th July, 90 people attended the presentation ceremony at the windmill. There were around 50 members of IMechE present. Other guests included some of our current windmill volunteers, and representatives from our three tiers of local government. The full text of the speeches made is available in a pdf file on this web site, click here.  Only very brief summaries are given on this page. Fortunately, as an outdoor event, the weather was kind to us. Although it was a hot day, there was a gentle but typical Chiltern escarpment breeze. 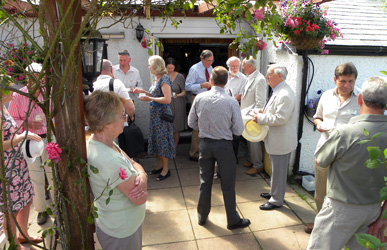 On arrival, guests had coffee or tea, at 'The Whip'. 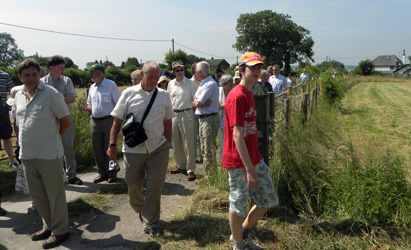 They then made their way towards the windmill. 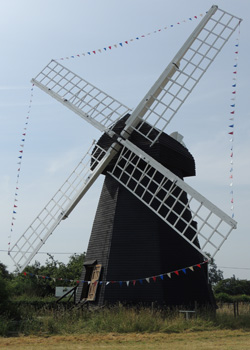 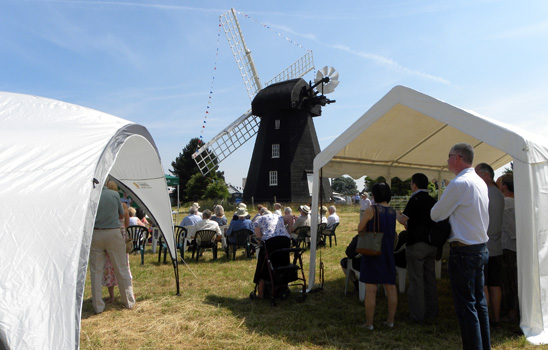 Some chairs had been provided for guests, as well as some cover. 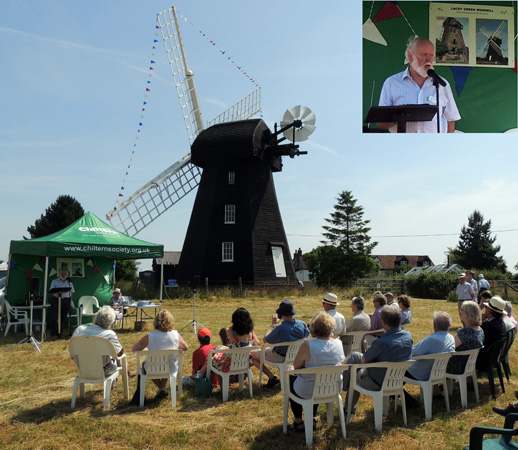 With a suitable backdrop of the windmill, Michael Hardy introduced the proceedings, as Honorary Secretary of the Windmill Restoration Committee.

Michael Hardy welcomed 90 people to what was a very important occasion for the windmill, so she had been dressed in her traditional celebratory bunting. He listed some of the people who were present, and explained to them that Lacey Green was the oldest smock mill, and why they tended not to be long-lived. He considered some of the engineering aspects of the windmill, detailing that it was clear to see how much of the improving technology of windmills had been fitted to this windmill in the 18th and 19th centuries. He also explained that the most important piece of mechanical engineering for the mill now was the fact that since 1985 the fantail has once again been automatically turning the cap into the wind, a crucial measure for the safety of this windmill whose sail tips reach 800 feet above sea level.

He mentioned the condition of the windmill at various times since it stopped working in 1915, which could clearly be seen in a special series of photographs that had been put up in the white tent.  He then described how a young Civil Engineer, Christopher Wallis, had managed to persuade people that he had devised a plan of how the 'impossible' task of saving and restoring the mill could be achieved, by precisely planning how it could be winched back to the perpendicular again. The mammoth restoration task had been achieved by a large number of volunteers over a 15 year period, starting in 1971.

Michael then invited the iMechE members to look around the interior of the windmill, explaining who would be on each floor to help them.

The iMechE members then had a look around the interior of the windmill. 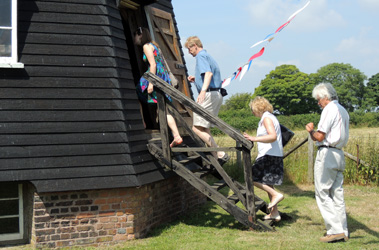 There was a guide on each floor to talk to them, or answer any of their questions.

The other guests had an opportunity to look at some displays in the tents in the field. 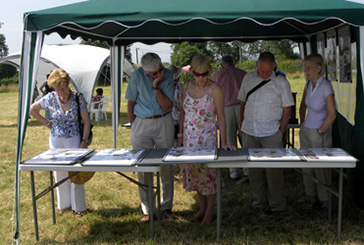 This was also a time to have a chat with old and new acquaintances, about mills and possibly even other subjects. 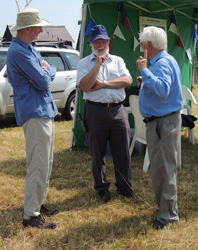 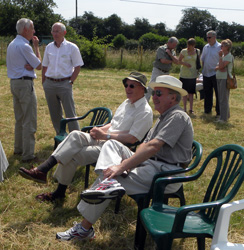 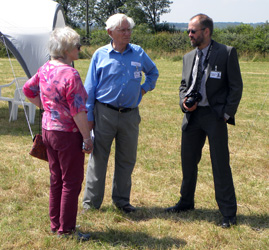 After the members of the Institution of Mechanical Engineers had visited the windmill, it was time for the presentation ceremony, when four people spoke. The complete text of all the day's speeches can be found on another page on this website (links are at the top and bottom of this page).

The main speaker was John Wood, Chairman of the Heritage Committee of the Institution of Mechanical Engineers. 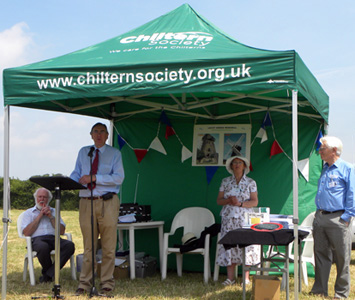 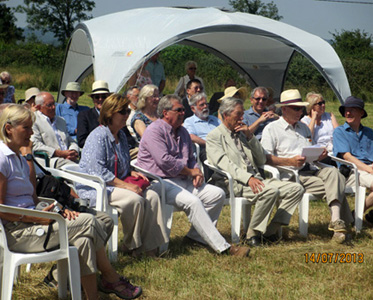 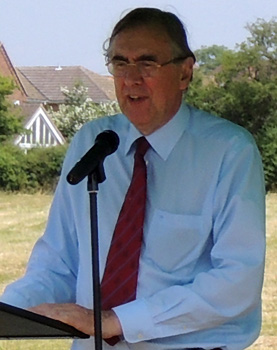 John Wood began by thanking Michael Hardy for his introduction. He gave some details about IMechE's Engineering Heritage Award scheme, and how it had recently been rejuvenated, which coincided with a welcome interest in our Industrial Heritage. He said that Lacey Green was the first windmill to be recognised by the award, and would be amongst the very earliest recipients.

John Wood said that Michael had referred to some people being interested or even infatuated with mills, and he would put himself in that category. He had grown up close to Shipley mill in Sussex, and had gone to school at Cranbrook in Kent, where he overlooked Union mill, the tallest smock mill. Only this week he had dragged his wife on a tour of Drainage Mills. He described how when this mill was built there were really only two examples of mechanical engineering technologies, mills and clockwork. The term millwright is still used to describe a highly respected trade.

John Wood then talked about the restoration and said that "Christopher Wallis's determination, passion, and engineering ability had been instrumental in saving this marvellous mill, to ensure that we can now enjoy it today, and hopefully it will survive for many generations to enjoy in the years ahead".

John Wood then presented the plaque for the Engineering Heritage Award to Barbara Wallis. Barbara received it on behalf of the Windmill Restoration Committee. 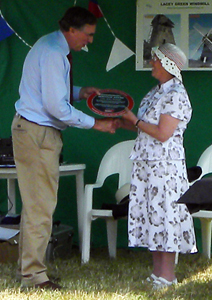 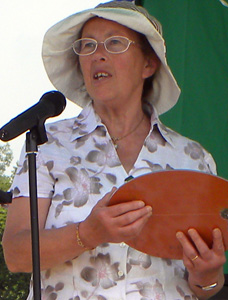 Barbara Wallis said "It is with great pleasure that I accept this on behalf of The Chiltern Society. My husband Christopher Wallis found the engineering solution to the problem that was Lacey Green Windmill. For several years The Chiltern Society had wanted to repair it, but could not see how, until Christopher applied the engineering solution that was needed."

Mike Highfield, Chairman of the Windmill Restoration Committee, then spoke. 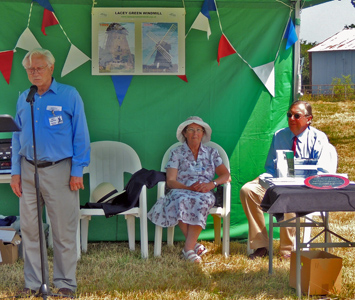 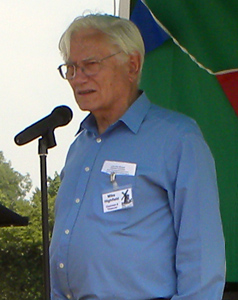 Mike Highfield said he was delighted that we have received an award from such an organisation as the Institution of Mechanical Engineers, which sets the highest standards. The award is a tribute to the original builders, men who never presented a paper to a learned society and may not have been able to write one had they been invited. They were great engineers who solved the problems of gear ratios, mesh and pitch circles long before maths arrived to prove them right. The restoration work had just followed the work that was already there, Chris Wallis's question was always "How would they have done it?"

Mike then spoke about the volunteers and the leadership that they had needed to complete a seemingly impossible task.

Roger Newman, Vice-Chairman of the Chiltern Society then spoke. 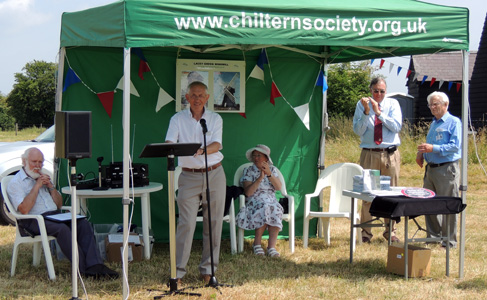 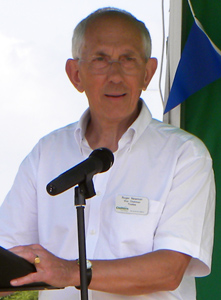 Roger Newman opened by saying he would like to formally congratulate Michael and Betty Hardy for laying on such a fantastic day, with all their volunteers.

He read the following message from the Society's President, Michael Rush: “I was absolutely delighted to hear about this wonderful achievement by you and all your committee and volunteers, and especially remembering the inspirational leadership of Chris Wallis, in gaining the award for Lacey Green Windmill. This very prestigious award by the Institution of Mechanical Engineers is a well earned recognition for all the hard work and efforts over the past decades. I am sure that everyone closely involved will take very great pride in the award, which also reflects so well on The Chiltern Society as a whole.”

Roger said this was an important milestone for The Chiltern Society, which was founded nearly 50 years ago. He said that the Society was shortly due to take on the responsibility of looking after more sites, and the example of what has been achieved here at Lacey Green cannot but provide tremendous inspiration for new volunteers, both in terms of commitment and long-standing tenacity to overcome all sorts of obstacles. He ended by thanking all the team at Lacey Green Windmill for their hard work over the years, and thanked the Institution of Mechanical Engineers for joining us.

Michael Hardy then closed the proceedings. 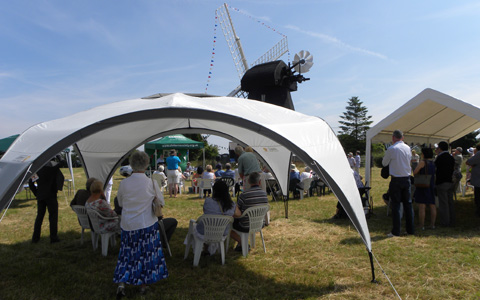 Michael Hardy thanked all the previous speakers, and introduced Chris Boll (who would lead the detailed tour of the windmill) as one of those people with a life-long interest in mills. He also thanked the owner, Rosemarie Smith for the use of her field for this occasion. He also remarked that during this presentation event, a change in the direction (from north to north-west) of the gentle Chiltern breeze on this hot day, had let the windmill give a perfect demonstration of how she always adjusts her cap to keep the main sails facing into the wind.

A group of around a dozen guests then had a detailed tour of the windmill, with Chris Boll, a member of the Restoration Committee. 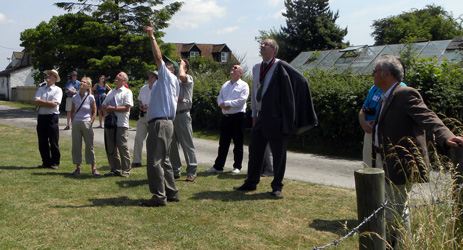 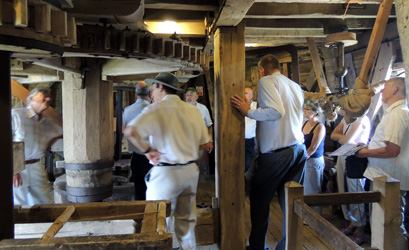